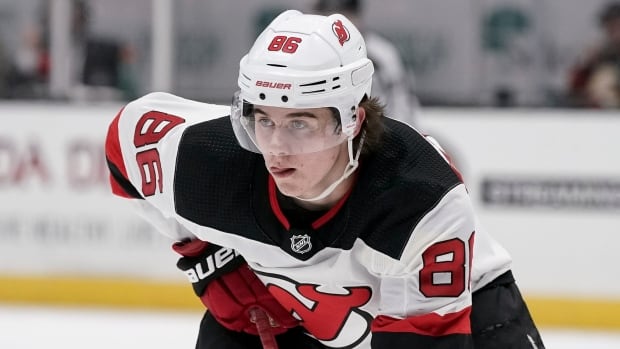 The New Jersey Devils have locked up their best player until the end of the decade, signing centre Jack Hughes to an eight-year, $64 million US contract extension.

General manager Tom Fitzgerald announced the signing Tuesday afternoon, hours before the Devils and Hughes were to face the San Jose Sharks.

Hughes is returning to the lineup after missing 17 games with a dislocated shoulder.

“It’s a fantastic day for the organization and for our team, and for Jack and his family,” Fitzgerald said shortly before Tuesday night’s game. “It’s a win-win.”

Hughes, the No. 1 pick overall in the 2019 NHL draft will earn an average salary of $8 million with the new contract. His salary over the deal will range from $9 million next season and dropping to $7 million in the final two years.

“I’m so excited to sign this deal for myself and for my family,” Hughes said. “I love being in New Jersey and I love playing in New Jersey. I wouldn’t want to play anywhere else, and we are really building something special. I believe in what we are doing here, and we have a great chance to be successful for a long time. This contract shows that this team is extremely invested in me and I’m also really dedicated to this organization.”

“We all know what Jack means to the team on and off the ice- he’s an unbelievable player and a fantastic person,” Blitzer said. “His future is incredibly bright and he will be a pillar for our franchise for years to come.”

The one thing the 20-year-old Hughes has not done is register a lot of points. That might be the byproduct of playing on weak teams. Fitzgerald added that Hughes’ style of play is to be admired and followed by his teammates.

Hughes has two goals and one assist in two games this year. In his first two seasons, along with the two games played this year, he has 55 points (20 goals, 35 assists) in 119 NHL games.

Hughes finished second on the Devils in points last season, and led the club with 142 shots on goal. He was the only forward who played in all 56 games.

Hughes represented the United States twice at the world juniors in 2018 and 2019.

“He’s a great player and we think he can be one of the elite players in the league,” Fitzgerald added. “As he grows and develops and matures as a player, the sky’s the limit.”

Hughes’ younger brother, Luke, was New Jersey’s first-round selection, and the fourth overall in the 2021 NHL draft. The defenceman is currently playing at Michigan. His older brother, Quinn, is a defenceman for the Vancouver Canucks.

Wild Check-In: Forwards Step Up in Back-to-Back Wins Over Blackhawks
How a tweet from a Flyers fan in Louisiana got him to his first game in Philly
Bold predictions for the second half of the NHL season: Trades, playoff races, awards, more
Vegas takes on Carolina, seeks 8th straight road win
Olympic opportunities for Eric Staal, Claude Julien could re-open door to NHL