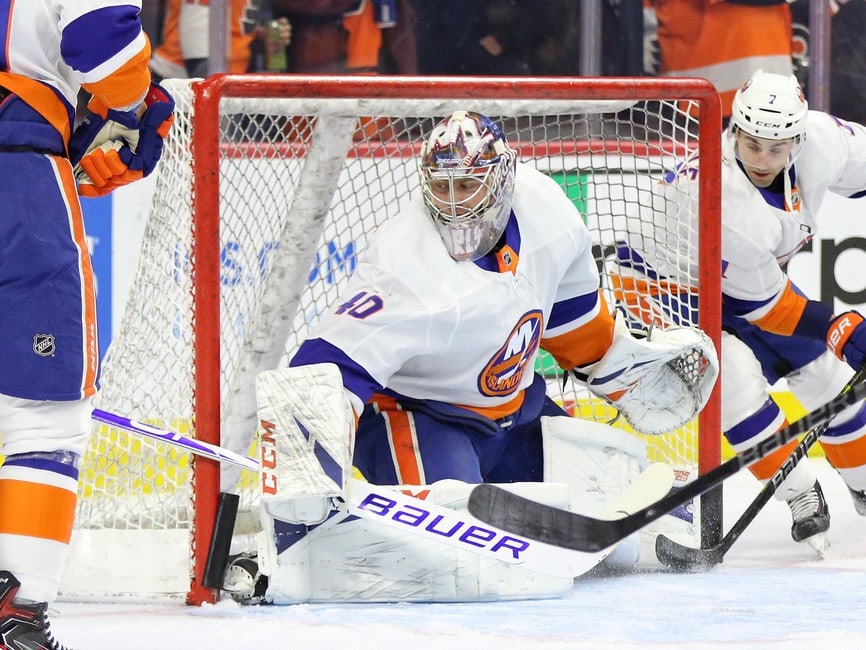 To say that the recent month was bad for the New York Islanders is an understatement. The team is currently on an eight-game losing streak which started with a 5-2 loss to the Minnesota Wild and dealing with a plethora of injuries to key players on the roster as well as a Covid-19 outbreak within the roster that resulted in the final two games of November being postponed.

Despite the tough month that left the Islanders with only five wins in their first 17 games and in last place in the Metropolitan Division, there were plenty of bright spots with how the team looked and some of the players on the roster. Some young players in particular that were called up stepped up and stood out. Moreover, some skaters on the roster were a reminder of how the season is going to turn around and who will potentially lead the way.

Richard Panik was acquired when the Islanders traded Nick Leddy to the Detriot Red Wings prior to the NHL expansion draft. The move was intended to primarily create cap space to allow the Islanders to re-sign many of the pending free agents on the roster, including Kyle Palmieri, Casey Cizikas, and Anthony Beauvillier, and as a result, Panik wasn’t seen as a regular skater in the lineup, resulting in him failing to make the opening night roster.

However, with multiple players being sidelined in the recent games, Panik got called up to the roster to play on the later forward lines for four games. While failing to score and only recording one assist, Panik helped establish an offensive zone presence for a struggling Islanders offense, and among the forwards in the lineup, was able to create more pressure in the offensive zone and create offensive opportunities. It’s possible the Islanders will keep the 30-year-old forward on the roster when the team resumes play and have him play alongside Jean-Gabriel Pageau on the later shift with the hope that the offense can start to find the back of the net throughout the roster.

With Scott Mayfield being the only active defenseman from the opening night roster by the end of the month, the Islanders were forced to turn to 23-year-old defenseman Robin Salo for four games. Salo, like Noah Dobson last season, is a promising young defenseman that has the ability to make an impact on the roster with great skating and strong defense in both the neutral zone and defensive zone. The young defenseman struggled in the first four games, oftentimes failing to pick up opposing skaters in the offensive zone or failing to disrupt passing lanes, but the Islanders saw a defenseman that not only can improve into a starter but become a skater that can effectively carry the puck into the offensive zone and help turn defense into instant offense, something the team desperately needs at the moment.

Brock Nelson will miss the upcoming weeks of action with a lower-body injury and won’t impact the roster when the team returns to the ice. However, prior to the injury, Nelson was one of the best goalscorers and often the only goalscorer on the Islanders.

Nelson scored seven goals in the month and leads the Islanders with nine goals on the season. Nelson continued to create scoring chances in the center of the offensive zone and find open shots near the net to open up the offense and allow the Islanders to put pressure on opposing goaltenders. With the team only averaging 1.88 goals per game, the forward unit will miss the offensive presence the 30-year-old veteran scorer provides and the products added to the second forward line.

Throughout the losing streak, the Islanders continued to receive great performances from their goaltending duo of Semyon Varlamov and Ilya Sorokin. Sorokin, in particular, has arguably been the Islanders’ best player, keeping the team in games and bailing out defensive mistakes while facing a high volume of shots. Starting 13 of the 17 games this season, the 26-year-old goaltender has a .928 save percentage and a 2.42 goals-against average on 415 shots.

Varlamov, on the other hand, made his season debut against the Wild and doesn’t have great numbers in the net with a .881 save percentage and a 3.46 goals-against average on 134 shots. However, the majority of the goals that are scored on the veteran goaltender can be pinned on poor defensive play, and for the majority of games, Varlamov has kept the Islanders within games and prevented opponents from putting the game out of reach.

How The Islanders Will Bounce Back

The Islanders’ playoff hopes look bleak at the moment, being in last place in the Metropolitan Division and forced to surpass a handful of competitive teams. However, as a team that has reached the Stanley Cup Semifinal in consecutive seasons, the Islanders have the pieces in place to string together a few wins and transform into one of the best teams in the NHL. The team needs to apply pressure on opposing defenses and goaltenders in the offensive zone and improve the hapless offense, but more importantly, the skaters are not playing to their skillsets. Games need to be slowed down and played on the forecheck for the defensive forwards that the roster possesses.

Mike Fink joined The Hockey Writers in November 2020 and covers the New York Islanders for The Hockey Writers, a team that has turned themselves into legitimate cup contenders with Barry Trotz as the head coach. In addition to covering the Islanders, Fink has written for multiple sports blogs and platforms covering the NHL, NFL, MLB and college sports.