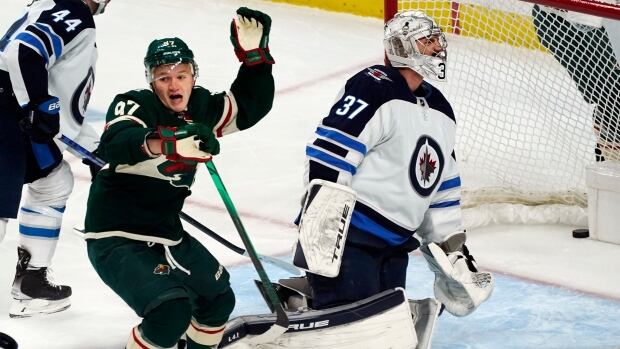 Kirill Kaprizov scored and tied a career high with three assists to help the Minnesota Wild rout the Winnipeg Jets 7-1 on Friday.

Mats Zuccarello scored twice before leaving with an apparent injury, Alex Goligoski, Ryan Hartman, Jon Merrill and Matt Dumba also scored in the start of a five-game homestand. Minnesota is 6-2-0 on home ice, scoring at least four goals in each win.

Zuccarello went to the locker room late in the second period after an uncalled slash to the left wrist by Nathan Beaulieu. Zuccarello did not return.

The frustrated Jets have lost four straight, are winless in the past five and the franchise-best streak of 14 games of not giving up more than three goals is over.

Pierre-Luc Dubois scored for Winnipeg. It has scored just five goals on 184 shots over its past five starts, and was blanked 3-0 in Columbus on Wednesday night.

WATCH l 9 players who scored against the most goalies:

9 players who punished the most goalies…in 90 seconds

These players not only scored a lot of goals in their careers, but made sure to do it against as many goaltenders as possible. 2:10

Connor Hellebuyck, who had allowed no more than two goals in each of his previous nine starts, finished with 10 saves before getting pulled early in the second period.

They weren’t all his fault as he was the victim of a couple bad bounces and some horrendous defensive zone play.

Goligoski’s wrist shot from the blue line deflected off Nikolaj Ehlers and found its way through traffic 52 seconds in for a 1-0 lead. A long shot from Zuccarello ricocheted off the post, off Hellebuyck’s upper arm and trickled across the line at 7:47. It was Minnesota’s third shot.

The Zuccarello-Hartman-Kaprizov line connected for two goals 45 seconds apart early in the second period for a 4-0 lead that ended Hellebuyck’s outing. He was replaced by Eric Comrie.

First, Hellebuyck stopped a shot by Kaprizov, but Hartman was left alone beside the blue paint for a rebound. Then a shot from the point by Jonas Brodin went to Kaprizov whose cross-crease pass went to a wide-open Zuccarello for a simple redirect.

Winnipeg’s frustration began to show in the second period.

Beaulieu took a run at Goligoski along the end boards, and Evgeny Svechnikov was assessed a double-minor for slashing and roughing a couple minutes later, leading to multiple scrums. Logan Stanley and Minnesota’s Joel Eriksson Ek each went off for roughing 34 seconds later.