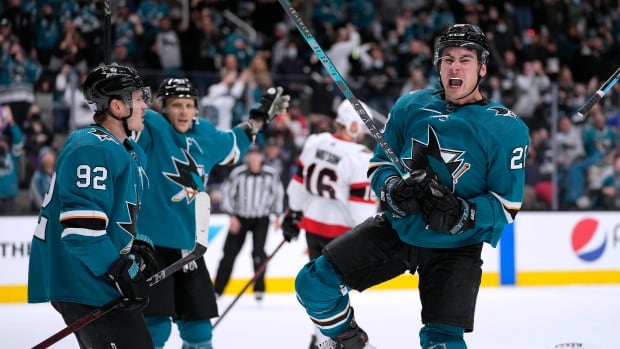 “I thought it was one of those games where there were a lot of momentum shifts,” Sharks coach Bob Boughner said. “I was happy with the way we stuck with it. I think it could’ve gone the other way on us real quickly.”

Brady Tkachuk had a goal and an assist for the Senators, who also got goals from Josh Norris and Connor Brown. Matt Murray made 23 saves in defeat.

“I thought we played a pretty good game,” Tkachuk said. “We controlled the play pretty well I thought the first 40 (minutes) and then we played pretty well until they got that one with eight minutes left or something. So definitely frustrating, but we’re gonna have to learn from this one.”

Nieto opened the scoring for San Jose with his first of the season just over seven minutes into the first period.

Norris netted the equalizer later in the period for his team-high eighth goal.

Hertl’s eighth put the Sharks ahead 2-1 in the second, but Tkachuk and Brown answered with goals 1:33 apart to give Ottawa its first lead.

Bonino, playing in his 700th career game, tied it on the power play with 31 seconds left in the second period, his first goal with the Sharks.

“That was one of the happiest goal piles I’ve been in,” Bonino said. “The guys were pretty happy for me. It felt like I could exhale finally.”

Rob Pizzo decided the time was right to speak to the man responsible for putting together Canada’s Olympic hockey team. 8:17

With the game tied 3-3, Meier buried his seventh of the season just more than midway through the third.

“[Rudolfs Balcers] made a great pass to me and I was coming into the slot and just had the defenceman flat-footed there and got a pretty good shot off,” Meier said.

“At the end of the day, it’s about winning,” Norris said. “We’ve got to dig ourselves out of it and just keep playing.”