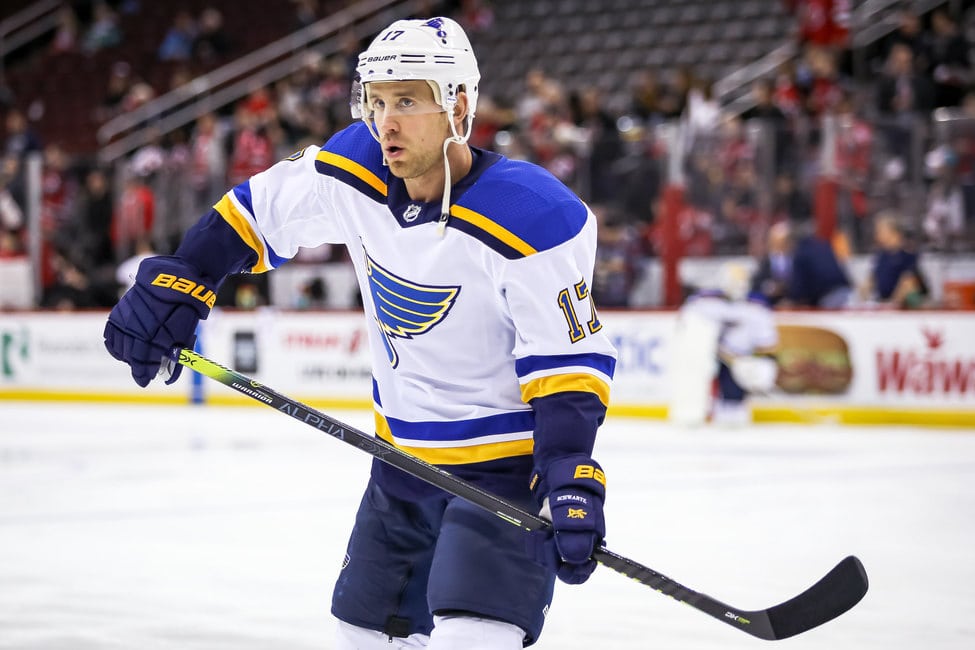 With the roster retooling that the St. Louis Blues did for this season, they saw multiple departures from key players. The turnover between now and the 2019 Stanley Cup team has been stunning. Let’s take a look at the key departures from the 2020-21 team and how they are doing this season.

Jaden Schwartz was a career Blue up until this season when he signed a five-year contract with an annual average value (AAV) of $5.5 million with the Seattle Kraken. It was likely the right time for the relationship with Schwartz and the Blues to end. He has struggled to stay healthy and wanted to be closer to home after the passing of his father.

His two-way numbers have dropped a bit, but that comes with the territory, as the expansion Kraken have struggled. But his point production has been solid, with 16 points in 19 games. He is certainly missed as a Blue, being a perfect fit.

He only had 21 points in 40 games last season, so there is no doubt that he will pass up those numbers this season. I’m happy for Schwartz, the change of scenery is good for him, and I hope he sees continued success in the future.

Vince Dunn was taken in the expansion draft by the Kraken, which was expected by most people going into it. The Blues have enough depth in their defensive unit to withstand this loss, especially with Torey Krug, Justin Faulk, and the emergence of Scott Perunovich.

He’s been mostly the same player in Seattle as he was in St. Louis, a solid puck-moving defenseman who has his struggles in the defensive part of the game. He has eight points in 17 games this season while having zero goals on the power play, but he quarterbacks their second unit.

The Blues have two defensemen who are worthy of quarterbacking the power-play units, as Krug and Perunovich have been fantastic in that regard. There is no doubt that they could withstand the loss of Dunn. He’s a solid player and will have a solid career, but the Blues prepared for this loss and have withstood it.

Sammy Blais was traded by the Blues to the New York Rangers in a move that sent Pavel Buchnevich to St. Louis. That deal has been good for the Blues and was looking to be good for New York until an injury took his season away.

Blais was injury-prone during the early parts of his career in St. Louis, but this injury was on a questionable play by PK Subban of the New Jersey Devils. It’s so unfortunate that a large part of the Rangers’ bottom-six is lost with this injury.

Before being out for the season, Blais had appeared in 14 games and tallied four points, all of which were assists. I watched him closely during these games and he was doing what he does, which is hit everything in sight and show brilliant flashes of skill. He had 12 hits in the last four games he played this season, with two four-hit games mixed in.

Blais was a movable asset for the Blues, given their depth and need for another top-six winger to replace Schwartz. Buchnevich has been good for them and hopefully, Blais can be back stronger than ever for the Rangers.

Mike Hoffman was a polarizing Blue for one season, being overly criticized for his overall game, while everybody knew he was there to just score goals. He departed in free agency when he signed a three-year deal, carrying a $4.5 million AAV with the Montreal Canadiens.

Related: Mike Hoffman: 4 Things to Know About the Canadiens Forward

For the Blues last season, he scored 17 goals and 19 assists for 36 points in 52 games. He was productive and had some good and bad streaks, as most goal scorers do. The Blues certainly misused him in parts of the season, which hurt his play and production. Once he was a mainstay on the top power-play unit, his numbers got better.

Similar to Blais, Hoffman has dealt with injuries this season and is currently on injured reserve, but should return soon. He scored four goals in 13 games when he played for Montreal this season, which seems low in comparison to his career numbers. His plus/minus was also a minus-9 on a struggling Canadiens team.

The Blues were able to replace Hoffman and Schwartz with Buchnevich and Brandon Saad, so I think it will work out fine for them. Despite these losses, I believe the Blues will be fine, they’ve easily replaced these four. You can’t point to any of the four players here and say that the Blues really miss them, which was the case with Alex Pietrangelo last season.

I have been covering sports for nearly a decade. I started with FanSided as a Baseball Contributor. Now I am writing about the NHL and the St. Louis Blues for The Hockey Writers. I grew up in Central Illinois as a huge fan of every sport. Finally, I do various podcasting across all major platforms.