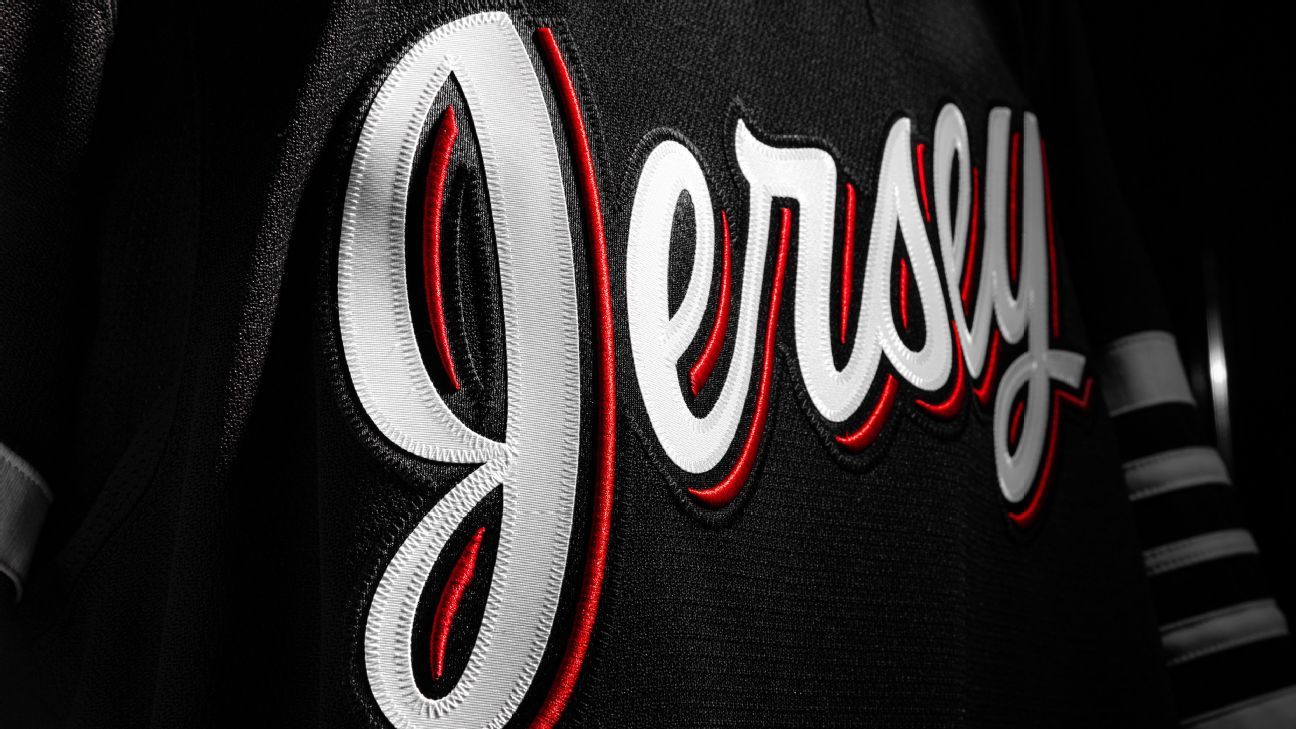 NEWARK, N.J. — Martin Brodeur made history for 21 years as a goaltender for the New Jersey Devils, leading the franchise to three Stanley Cup championships. Now, he has made something else for the Devils: a new jersey, for New Jersey.

“I wish we could have played in this,” said Brodeur, while holding a black Devils sweater with his name and No. 30 on the back. “It’s just a cool thing.”

On Tuesday, the Devils unveil the first third jersey in the franchise’s history, leaving the Detroit Red Wings and the expansion Seattle Kraken as the only NHL teams without an official alternate sweater in their history.

It’s solid black with a total of 21 white stripes around the shoulders, arms and waist. The white numbers have a red shading underneath, as does the centerpiece of the design: the word “JERSEY” in a script font as the crest.

(Yes, a jersey with the word “JERSEY” on the front of it. For the record, the pants do not say “PANTS.”)

Adding to his résumé as a Hall of Fame goalie and the team’s executive vice president/advisor of hockey operations, Brodeur is now a fashion designer. He played an active role in co-creating the team’s third jersey, from the concept phases through the final design.

“The alumni have a little bit of envy going on,” Jillian Frechette, the senior vice president of marketing for the Devils, told ESPN. “Our players have never had an official third jersey, so this was really special to Marty. The most important piece of this was the authenticity to the sport. Marty’s fingerprints on this jersey are critically important.”

Frechette and Brodeur were the driving forces behind the jersey’s design and concept, although many inside the organization, along with executives from Adidas and the NHL, contributed to the process.

And it was a process.

“When you’re in a market for almost 40 years without a third jersey, then you have to get it right,” Frechette said. “There were a lot of details that we sweated over. Jerseys are really special, for both the players and the fans. Sometimes [fans] can be overwhelmingly in love, some fans will be ambivalent and some fans will take a little longer [to like it]. But we believe that most of our fans will love it, and grow to really cherish it.”

The only times the Devils have worn sweaters outside of their official red and black home and away jerseys were when they’d don their red, white and green jerseys that the team wore from 1982 to 1992 for special dates on the schedule and for the 2014 Stadium Series game against the New York Rangers at Yankee Stadium. The Devils’ “reverse retro” jersey in 2020-21 was also a variation on their original sweater.

Devils fans have asked for an alternate jersey for decades. A black alternate jersey always seemed like a natural flex for the team, as it’s a primary color in its logo. Plus, all-black jerseys have been commonplace in the NHL through the years.

But there was one insurmountable obstacle in the way of creating an alternative jersey: Former president and general manager Lou Lamoriello, who lorded over the team from 1987 through 2015, loathed the concept.

“I don’t believe in it,” Lamoriello told ESPN in 2003. “I strongly believe that you have to have one identity as a team. We want to create a feeling that our home and away jerseys are special and that it means something special to wear one.”

What will Lamoriello, now the general manager of the New York Islanders, think of this all-black third jersey?

“He’s probably going to shake his head for a little bit,” Brodeur said. “But he’ll be happy, because I’m the one that helped to create it.”

Frechette started with the team three years ago. She was previously with the Calgary Flames, where she helped design jerseys for their AHL affiliate. Creating a third jersey for the Devils was something immediately put on her plate, as she picked up the threads from some work that predated her arrival.

Brodeur had wanted to create a third jersey for the Devils since returning to the team as an executive in 2018.

Frechette and Brodeur would text each other photographs of jersey designs they admired, from the stitching to particular fonts — and not just in hockey. “Marty would be traveling and would send me a photo of something golf-related or basketball-related,” she said.

The Devils had plenty of designs for the jerseys, but what works on paper doesn’t always work in reality. The team created only three physical prototypes: a black and white jersey with no shading; one with boxes on the numbers; and the third one, which ended up being the final concept.

The jerseys were subjects of secret on-ice testing by Devils players last season, in the team’s practice rink attached to Prudential Center. They were photographed and filmed, to see what the designs looked like on television.

“There are two lenses. Obviously, the fan wears it, so the details that you see six inches from your chin are very important. But how it shows up on the screen in your living room is equally as important,” Frechette said.

There was a prototype that the Devils felt was close but wasn’t quite right because of some stitching choices and the lack of the drop shadow. It was a setback that caused them to extend their launch window until they could tweak it.

Brodeur said that once it was decided they were going to do a word mark for the logo, it was essential to make it legible.

“Our [typical] logo is simple. Easy to recognize. Now you’re talking about writing on the front of a jersey. When you’re 30 rows away from the ice, how well are you going to be able to see it and recognize what it says? But I think we really hit it. Especially when we added the red near the end of the process,” he said.

Settling on that font “took a really long time,” said Frechette, who said Brodeur has around 50 images of different font inspirations on his phone.

“There were a lot of things we went through. Looking at how fluid it was. Did it live as one unit, or was it broken up?” she said.

There was one iteration where the word crest was too chunky, so they streamlined it to make it more fluid. “We didn’t want something fat and compressed,” she said. “I know some of these words aren’t exactly sexy, but the final presentation felt crisp. In the end, we were really happy with the font we went with, especially with the drop shadow.”

“We knew pretty early that our vision was what it needed to look like. We had some challenges along the way just getting it just so,” Frechette added.

That shadow — which is also underneath the numbers on the sleeves and the back — went through different variations of size and color. Brodeur said that making it silver was something they considered. But in the end, the decision was to carry over the familiar red from the team’s principal jerseys.

The result feels a little like street art, which Frechette admits wasn’t the initial intention, although “that flavor will come through” in some of the creative that supports the new jersey.

The Devils are fond of saying that this third jersey is a nod to the past and a step forward to the future. The rest of the design carries some history with it.

The design has four “Easter egg” elements that touch on Devils alumni, franchise championships, the history of hockey in Newark and the state itself.

Brodeur wanted one design element that couldn’t quite make the leap from concept to reality. “I wanted the laces around the collar to be the mesh from a goalie net. But we couldn’t use the actual string,” he said.

Instead, the laces have a design on them that mimics the twine in the goal cage.

Team president Jake Reynolds said these details are important, but so was using the arrival of the third jersey as a pivot point for the franchise.

“Our fan base has been clamoring for a black jersey for a number of years. They’ve been anticipating it,” Reynolds said. “How it showed up is the fun part: this year, right as we’ve turned the corner to a new era of Devils hockey.”

What does Jack Hughes, the 20-year-old franchise player, think of the jersey?

“Loves it,” reports Reynolds. “We’ve shown it to about 90% of the team at this point, and the young guys were blown away. I probably can’t repeat some of the language that was said when they first saw them. There was an excitement about wearing these. About ushering in that new era.”

Dougie Hamilton said he always wanted to be part of a jersey debut. Fellow defenseman P.K. Subban — one of the NHL’s most fashion-forward players — had a look at one of the initial prototypes. Subban’s input was to move the word mark slightly, changing the angle of the crest. They took the advice.

The rollout of the third jerseys was beyond subtle — if you didn’t know what to look for, you wouldn’t have seen it.

At Brodeur’s golf tournament on Sept. 28, a hat he wore and one of the flags on the course referenced the jersey design. There have also been augmented reality activations that teased the look to fans.

The Devils didn’t do any formal focus groups with the fans, to keep the design under wraps. The secrecy nearly carried over to the finish line, but an e-commerce snafu last week briefly enabled fans to purchase the jersey.

The jerseys were shipped and ended up on social media, well before the team’s planned rollout.

The @NJDevils Alternate has been leaked. What are your thoughts on it?
Huge thanks to @Scottyk9 for the heads up! #HockeyTwitter #NJDevils pic.twitter.com/TmLIY21wYn

The reaction has been … well, passionate. When Devils fans envisioned an all-black alternative jersey, they likely didn’t envision this end product. Did Brodeur ever consider something a little more intense? Perhaps playing up the “Devil” part of the name rather than the “Jersey” part?

“Not really, actually,” he said with a laugh. “We wanted to make it exciting and young, but we didn’t want to scare any kids. We already have NJ Devil as our mascot, and that’s a little scary.”

The “JERSEY” jersey is meant to be a piece of a larger marketing campaign that celebrates the team’s status as New Jersey’s only pro team with the name of the state in its name. The “Made in Jersey” campaign started back in January, and the design will carry over to a number of other items.

Whatever the reaction is from fans, the “JERSEY” jersey isn’t going anywhere. Frechette said there’s a minimum three-year commitment to wearing the alternate jersey, with 12 to 15 games per season in which the Devils will wear it.

“For us, this isn’t just an in-and-out fashion application. It’s got some roots tied to something that’s a little broader than just a sweaty garment. It’s a commitment from the franchise,” Frechette said.

One of the franchise’s heroes is happy to have helped to create a new look.

“The organization’s been playing with the same jerseys for almost 40 years now,” Brodeur said. “When I was playing here, the fans were always saying how great it would be to have a black jersey. Coming back to the organization, seeing the excitement around the team, I think it’s going to leave a great mark to do a third jersey. It’s something for our fans to enjoy.”