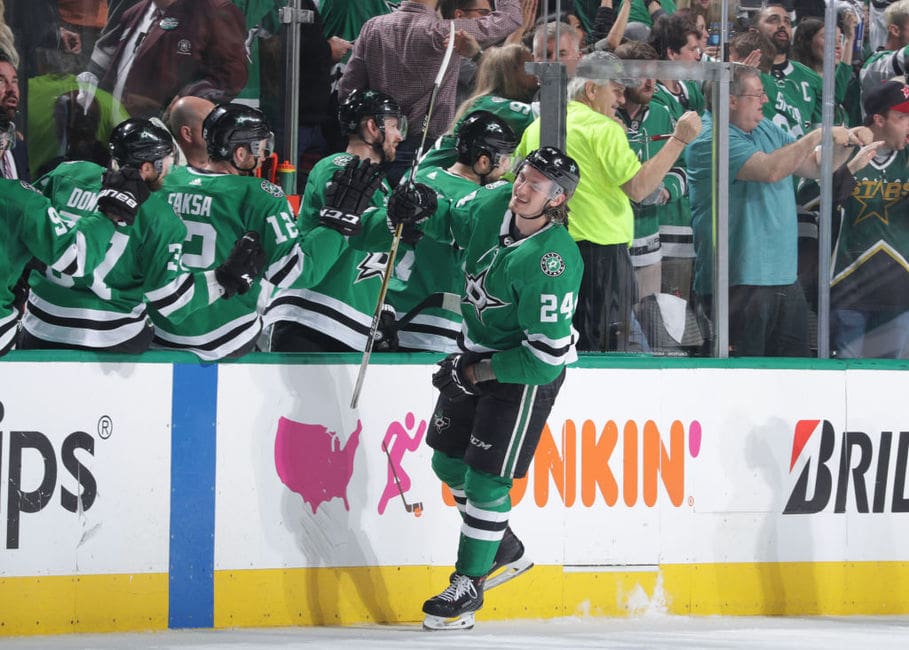 In this edition of Stars News & Rumors, Dallas holds a players-only meeting following a loss to Nashville, Roope Hintz finally tallied his first of the season, and Braden Holtby has hit a bump in the road.

Following the 4-2 loss to the Nashville Predators on Wednesday night, the Stars held a players-only meeting in the dressing room before addressing the media. While it is unknown what exactly was said in the meeting, losing for the sixth time in seven games makes it clear that the team is urgently trying to turn things around.

“We had a talk with the group there, and that stays there with the boys.”

These meetings have worked in the past as players take responsibility and address the issues in the room. Dallas needs to solve their issues fast as they continue to drop in the Central Division standings. Last night’s loss leaves them five points behind Nashville, who currently holds the final playoff spot in the Western Conference (sound familiar?). Adding to the drama, head coach Rick Bowness stepped up to the microphone following the game and delivered a brief statement before walking out of the media room.

“I know exactly what’s wrong with this team and we’re going to fix it.”

This statement shows a lot of confidence for a team that has struggled to find its game all season long. However, for the Stars and their fans, they hope their coach is right, and they can fix these issues as soon as possible.

Hintz With The Finnish

Roope Hintz entered this season with high expectations. After scoring 43 points in 41 games last season while battling through an injury, he was set to explode onto the scene in 2021-22. Unfortunately, he went 11 straight games to start the season without scoring a goal. Hintz played well in those games, and created plenty of high-danger scoring chances each night. However, due to some bad luck and lack of finish, he was only picked up two assists, and carried a minus-5 rating heading into the game against the Predators on Wednesday night.

“I mean, if we put together a highlight reel of creating grade-A’s (scoring chances), Roope is probably in every one of them. We keep talking to him but there’s only so much we can say to him. When it’s gonna come, it’s gonna come.”

Fortunately for Hintz and the Stars, it finally came on Wednesday against the Predators. On a skilled play, Hintz was able to glove a puck out of the air, drop it on the crease, and tap it into the open side of the net for his first goal of the season. While it certainly has to feel like a weight off his shoulders, his response after the game was that of a teammate.

“No, I didn’t have any pressure about that. I had lots of chances before that and it is just not good that it didn’t help with the win.”

Now that Hintz has broken the seal, Dallas hopes the floodgates stay open and he can remain hot.

“Especially Roope burying those. That was great for his confidence. That really helps everyone else feel really good that he’s finally got off that schneid.”

Holtby Hitting A Bump In The Road

After beginning the season on a tear, Stars goaltender Braden Holtby has struggled a bit. Since his incredible 43-save victory over the Los Angeles Kings, Holtby has recorded a mediocre .871 save percentage and 3.25 goals-against average in the last four games. His struggles are visible during the game as pucks seem to get away from him or find their way through that normally would not. On Wednesday, he allowed two goals from nearly the same spot down the right-wing that he would certainly like to have back.

“Tonight, we played a pretty good game. There’s a couple goals I could’ve played different, and then we’re talking about a different conversation right now. Sometimes, you focus on the outcome a little too much. That’s one where I felt like I could’ve been a bigger difference to help this team win this game. You know, you move forward and try to improve for tomorrow.”

With Ben Bishop still recovering from injury and Anton Khudobin struggling early in the season, Dallas desperately needs Holtby to find his game again. What started as a huge relief has turned into a sore spot in the lineup as of late. If the Stars are going to turn this thing around, their goaltending has to lead the way.

“History will tell you in this league, you don’t get above-average goaltending, you don’t win. The league is too tough.”

With the loss to Nashville, Dallas moves to 4-6-2 on the season, good for fifth place in the division. They will continue their home-heavy November schedule on Saturday when the Philadelphia Flyers come to town. The Stars will play eight of the next 10 games at home as they desperately try to swing their season in the right direction.

Sam Nestler is a Dallas Stars contributor for the ‘The Hockey Writers’. Growing up in New Jersey, Sam has been playing hockey since he was 7 years old. Developing a love for writing in college, Sam uses his hockey knowledge to create analyses and articles on every aspect of the game. Sam also hosts his own podcast on Spotify, the “Slapshot Sammy’ podcast, breaking down action across the NHL and NCAA. Check out the podcast here, and give his latest article a read!