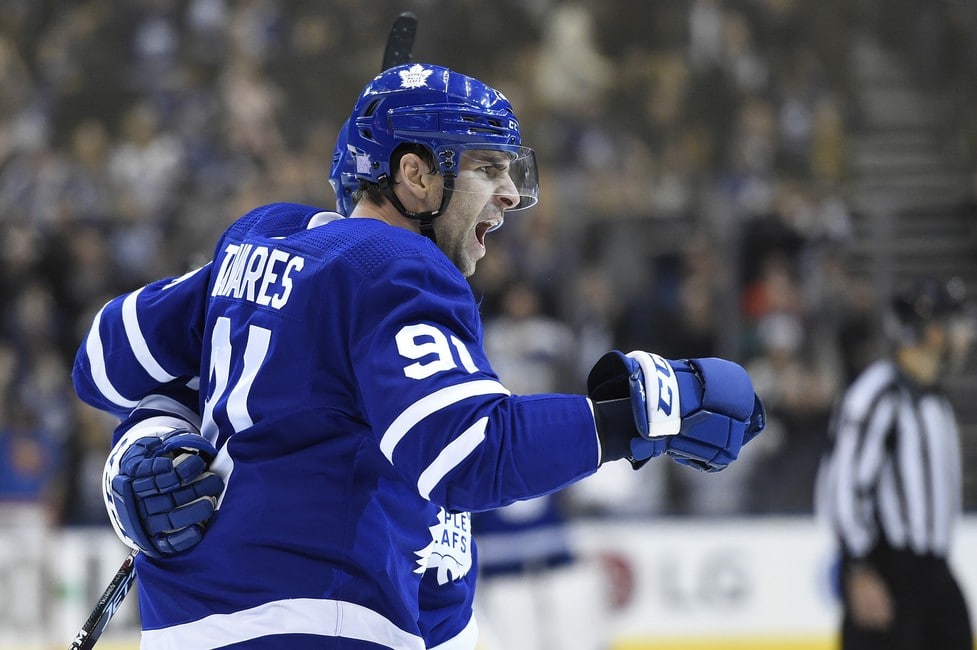 As the Toronto Maple Leafs prepare to play the Calgary Flames tonight, the team has made a small number of player changes and roster moves. In this edition of Maple Leafs’ News & Rumors, I’ll take a look at these changes. In addition, I’ll also look at the team’s schedule over the next two days as they face a back-to-back tomorrow against the Buffalo Sabres.

Item One: Getting Used to Winning Low-Scoring Games

The truth is that the Maple Leafs have been playing good defense – mostly. Except for the Los Angeles Kings’ game, the team’s defense hasn’t fallen below the standards that were set last season.

In fact, the Philadelphia Flyers game impressed Maple Leafs’ head coach Sheldon Keefe to the point where he noted that the team “did a really good job of defending our net today both coming into our zone and into the defensive zone. I really liked our special teams, penalty killing was outstanding. That gives us a lot of life and a lot of chances, obviously to keep it out of our net. If we keep the score down and keep the game manageable as offense was hard to come by.”

One thing that Keefe noted was that he spoke to the team about the idea of hanging in there to win close and low-scoring games. After Wednesday’s game, Keefe admitted: “When we went into the third, we talked about being comfortable winning the game 1-0 if that’s what it was going to take and we thought that if we had that approach there would be some offense available to us. (It was a) textbook third period in a lot of ways. It was a clean win for our team.”

That seems to be a new philosophy this season, which changes the way the team plays. Specifically, for Auston Matthews, it means that he will likely not win the Rocket Richard Trophy for goal-scoring. However, that doesn’t mean he won’t be playing solid offensive hockey. He just might not be the leading goal scorer on the team.

Thus far, it looks as if Matthews has accepted that philosophy and has actively worked to allow William Nylander to score goals that he sets up. During the Flyers’ game, Matthews had no goals but contributed two assists.

Will that kind of production become more the norm this season?

Item Two: Jack Campbell Will Start Against the Flames Tonight

As Luke Fox tweeted this morning, Sheldon Keefe announced that Jack Campbell start in goal tonight against the Flames. Campbell’s last start – as noted – was the 36-save shutout win over the Flyers two days ago. It was his second shutout of the season and dropped his goals-against-average to 1.90. At the same time, it lifted his save percentage to .936. His record now stands as 7-3-1 on the season.

John Tavares’ lower-body injury, whatever that might be, does not appear likely to keep him out of the game against Calgary. Tavares took for this morning’s option skate in his regular jersey and was back working with both Mitch Marner and Alex Kerfoot on line rushes.

Tavares also was part of the team’s first power-play unit. Keefe did note that Joey Anderson would take part in tonight’s pregame warmup just in case Tavares couldn’t play. Still, it looks almost certain that Tavares would be ready.

With Tavares likely to return to game action, it might be that Kirill Semyonov will be out of the lineup. Semyonov made his NHL debut against the Flyers on Wednesday night and logged almost 12 minutes of ice time. It was a pretty uneventful debut, but perhaps that’s not a bad thing. Semyonov did register a shot on goal.

What’s Next for the Maple Leafs?

The Flames are completing the second half of back-to-back road games. Last night they lost to the Montreal Canadiens by a 4-2 score. It’s the second game in a row the Flames have lost, with the San Jose Sharks beating them 4-1 in Calgary on Tuesday.

The Maple Leafs will complete their own back-to-back tomorrow against the Sabres in Buffalo. The word today was the coach Keefe failed to say who the starter would be in goal tomorrow. If the team wins tonight, I’m thinking it might be a good NHL debut for young Joseph Woll.

There’s history between the Flames and the Maple Leafs after last season. Will it bubble to the surface? The Flames can’t be in a good mood, and one would think the Maple Leafs will try hard to avoid a meltdown similar to the one they had against the Kings.

The Old Prof (Jim Parsons, Sr.) taught for more than 40 years in the Faculty of Education at the University of Alberta. He’s a Canadian boy, who has two degrees from the University of Kentucky and a doctorate from the University of Texas. He is now retired on Vancouver Island, where he lives with his family. His hobbies include playing with his hockey cards and simply being a sports fan – hockey, the Toronto Raptors, and CFL football (thinks Ricky Ray personifies how a professional athlete should act).

If you wonder why he doesn’t use his real name, it’s because his son – who’s also Jim Parsons – wrote for The Hockey Writers first and asked Jim Sr. to use another name so readers wouldn’t confuse their work.

Because Jim Sr. had worked in China, he adopted the Mandarin word for teacher (老師). The first character lǎo (老) means “old,” and the second character shī (師) means “teacher.” The literal translation of lǎoshī is “old teacher.” That became his pen name. Today, other than writing for The Hockey Writers, he teaches graduate students research design at several Canadian universities.

He looks forward to sharing his insights about the Toronto Maple Leafs and about how sports engages life more fully. His Twitter address is https://twitter.com/TheOldProf