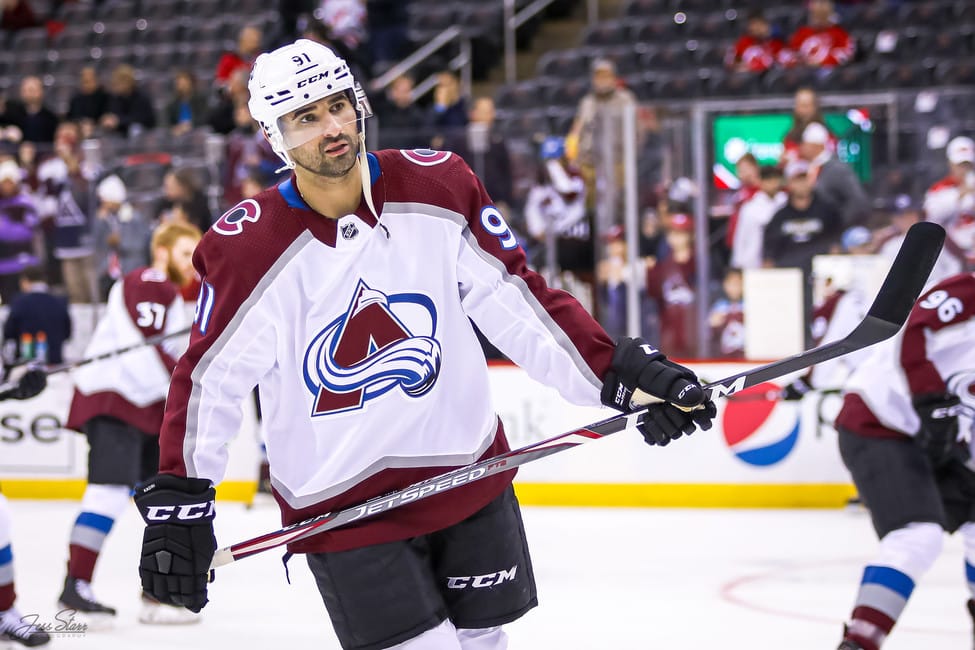 The Colorado Avalanche have recently awarded hefty contract extensions to several of their franchise cornerstones, including captain Gabriel Landeskog and blueline star Cale Makar this past offseason. They must also account for the looming contract extension of their most important piece, Nathan MacKinnon, who surely demands a substantial increase to his paltry compensation of $6.3-million per year after the 2022-23 campaign. Consequently, the Avalanche must decide how Nazem Kadri – a two-way center with a mean streak who is up for contract renewal – fits into the organization’s future plans. A resurgence of sorts has put his reputational issues on the back-burner, and suggests he could be given a contract extension for his efforts. Let’s dig in.

Simply put, Kadri has a bit of a temper. His occasionally zealous outbursts and hot-headed nature have led him to make emotionally-charged decisions, leaving his teams short-handed at inopportune times. His most recent suspension was handed down for an illegal check to the head of St. Louis Blues defenseman Justin Faulk, which saw the NHL’s Department of Player Safety slap Kadri with an eight-game suspension. His involuntary sabbatical stripped the Avalanche of the requisite depth to overpower their Western Conference rivals, the Vegas Golden Knights, and frustratingly resulted in Colorado’s third consecutive second-round exit.

Although Kadri has been suspended for several regular-season incidents, his most prominent infractions stem from back-to-back playoff series against the Boston Bruins while he was still a member of the Toronto Maple Leafs. In both series Kadri’s suspensions were a significant contributor in the Leafs’ successive seven-game defeats at the hands of the Bruins, and are rumoured to be the catalyst for the trade which brought him to Colorado for defenseman Tyson Barrie. The Avalanche are still smarting from the wounds caused by his irresponsible actions in the playoffs, so Kadri must prove to general manager Joe Sakic that he won’t continue to cost them in key moments. What’s the saying? Fool me once, shame on you?

In light of Nathan MacKinnon’s recent injury, Kadri is among a handful of players who must step up for the Avalanche in his absence. Luckily, the 31-year-old center is enjoying his most productive season in years after hitting an unprecedented offensive gear and simultaneously stating his case for a new contract at season’s end. He’s a divisive player to be sure, but there is a legitimate discussion to be had around whether his talent makes up for the accompanying headaches.

Through the first 10 games of the season, Kadri has scored 10 points (three goals and seven assists), which ties him for the Avalanche scoring lead, and amounts to the most productive pace of his career. His shooting percentage (SH%) dipped to 6.5 in 2020-21 – nearly half of his career-rate of 11.2 – but has rebounded to a more familiar 11.5% to start the year. His reduced shot-rate (2.6 per game after 3.04 last season) is a cause for concern, but a rediscovered scoring touch and plum role in attack should act as a buffer for a lower number of attempts on net over the long-term.

Outside of his increased scoring pace, Kadri has shown a proclivity for incisive playmaking. He’s tied for second in the NHL in primary assists (five) at five-on-five, which adds to his total of eight 5v5 points (27th). His per-60-minute stats are even more flattering, as he ranks first in primary assists, 10th in total assists, and 18th in points among NHL forwards who have skated in at least 100 5v5 minutes this season. Not only is he producing more in general, but he’s doing so while remaining ridiculously efficient.

His 18:28 of ice time constitutes the greatest usage of his time in the NHL and speaks to the credibility of his two-way excellence. Kadri’s deployment points to renewed faith from head coach Jared Bednar in his troubled pivot, even if the lineup upgrade is borne out of necessity. At 5v5, the Avalanche control 54% of expected goals (xGF%), 57% of scoring chances, and over 60% of high-danger opportunities with Nazem Kadri on the ice, of which the latter two are the best marks of his career. His increased attention to offence hasn’t cost him defensively, a promising development for Colorado’s coaches and upper management. So, what does Kadri command on the open market as a free agent?

Nathan MacKinnon’s recent injury leaves a hole at both first-line center and on the top power play unit, offering Kadri ample opportunity to continue producing offense at an elevated clip. For an aging player in a contract year, such a promotion is a god-send as Kadri seeks what should be the last big-money (relatively) deal of his career. His current contract was signed immediately before he rifled off consecutive 30-goal seasons for the Maple Leafs, a monstrous steal in retrospect.

Out of 20 NHL centers under contract who signed their current deals between the ages of 30 and 32, only five make $3-million or more per year. Of those five, two (Ryan Kesler and Bryan Little) aren’t playing because of injury, and several of the aforementioned 20 saw their production fall off a cliff after inking their contracts. It’s not out of the realm of possibility that Kadri can command over $5-million as an unrestricted free agent (UFA), if he maintains something approaching his point-per-game rate. He likely has a lengthy line of suitors clamouring for his signature come free agency, even when considering his troubled disciplinary history. Even so, the historically spotty health and rapid decline of his comparables suggests that lucrative offers may be sparse.

I don’t envy Sakic and his supporting staff. Kadri’s resurgence is undoubtedly a positive, but his age-profile and track record of – ahem – poor decisions makes extending him a new contract an uncomfortable debate. If Colorado’s highly-touted forward prospect in Alex Newhook shows significant development in his second professional season, the Avalanche find it much easier to let Kadri go to market and test his value. Personally, a slightly cheaper, short-term deal (2 years at most) is an ideal resolution which doesn’t hamstring Colorado as they navigate upcoming extensions for their young stars. That Kadri is delivering on his promise is a complicating factor, and only time will tell if it’s for real this time.

Marko is an aspiring sportswriter with a passion for crafting stories while using a combination of the eye-test and (shudder) analytics, which is complemented by an academic background in criminology and political science.

When not covering the Colorado Avalanche and Pittsburgh Penguins for The Hockey Writers, he can also be found pouring countless hours into various sports video games franchises, indulging in science fiction novels, and taking long runs around his neighbourhood.

Marko can be reached through his personal blog at unexpectedgoals.ca, and you can yell at him by following him on Twitter and other social media seen under articles like this one.