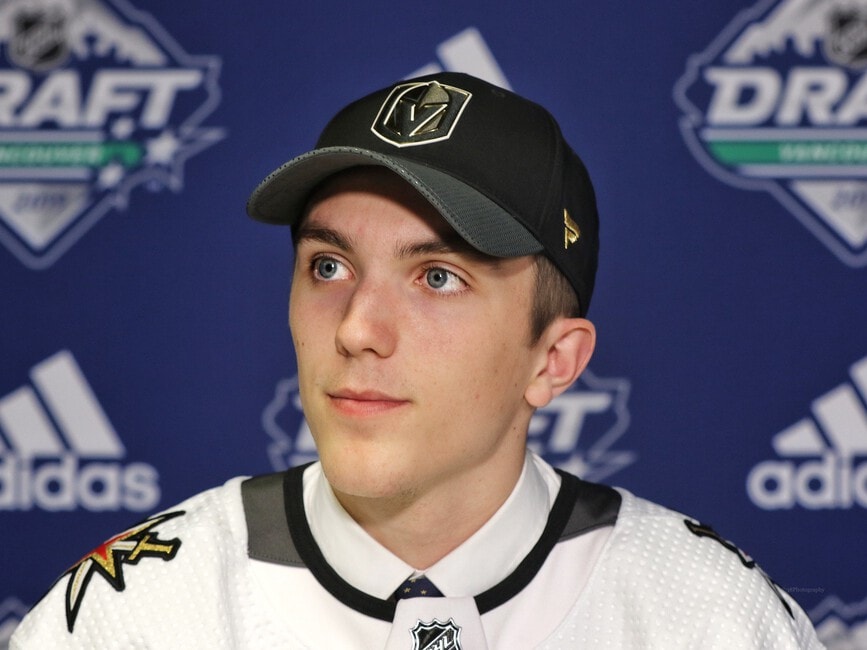 In this edition of Prospects News and Rumors, Vegas Golden Knights top prospect Peyton Krebs has been traded to the Buffalo Sabres for Jack Eichel, Seth Jarvis scored his first NHL goal against the Chicago Blackhawks and Sebastian Cossa continues to impress in the Western Hockey League (WHL) with the Edmonton Oil Kings.

Krebs Shipped to the Sabres in Eichel Trade

After months of speculation and trade rumors, the Sabres finally pulled the trigger on Eichel and shipped him off to the Golden Knights for top prospect Peyton Krebs and rugged forward Alex Tuch. Krebs was selected 17th overall by the Golden Knights in the 2019 NHL Draft and has played 13 games with them over the last two seasons, including six games in 2021-22. He currently has no points in nine games with a minus-6 in the plus/minus column. He also had a very successful WHL career with the Kootenay Ice and Winnipeg ICE where he finished with 62 goals and 231 points in 199 games.

Krebs was ranked 17th in THW’s Top-100 Prospects rankings and was named the Golden Knights’ top NHL prospect by Peter Baracchini as well. With him out of the mix, Michigan Wolverines’ forward Brendan Brisson takes over as their top prospect.

What Do the Sabres Get With Krebs?

With Krebs, the Sabres get a well-rounded pivot who excels at both offence and defence. He’s also a great playmaker with exceptional speed. Dylan Cozens, who was also selected in the 2019 Draft, could team up with Krebs to form a very potent one-two punch down the middle in the future.

Krebs is a very strong passer and has great speed, making it tough to defend against him. Defensively, he’s extremely dependable as he has great positioning and vision to intercept the puck and break plays up.

Krebs won’t be a superstar like Eichel, but he can be a very solid and dependable forward for the Sabres as they begin the post-Eichel era. As everyone has seen so far in 2021-22, the Sabres are capable of being a good team without a prominent center like him. For their success to continue, they need to play as a team rather than put all their chips in on one player. With Cozens and Krebs, they have a great foundation to build on as they attempt to make the playoffs for the first time in a decade.

Sticking with the topic of top prospects, the Carolina Hurricanes have one in 19-year-old Seth Jarvis who just scored his first NHL goal against the Chicago Blackhawks on Wednesday. Like Lucas Raymond, he broke the goose egg on veteran goaltender Marc-Andre Fleury. It was pretty too, as he scored on a quick deke on a breakaway in the second period.

Selected 13th overall by the Hurricanes in the 2020 Draft, Jarvis wasn’t expected to make the Hurricanes out of camp. After a very productive season in the American Hockey League (AHL) with the Chicago Wolves where he had seven goals and 11 points in nine games, he impressed the coaching staff enough to snag one of the final spots on the roster. The pride of Winnipeg, Manitoba is now a point-a-game player after two points in his first two games.

Cossa Dominating the WHL With the Oil Kings Once Again

Just when you thought Sebastian Cossa couldn’t get any better than his 1.57 goals-against average (GAA) and .941 save percentage (SV%) in 2020-21, he goes and improves upon those numbers and posts a 1.44 GAA and .948 SV% to begin 2021-22. He has proven to be nearly unbeatable as the undisputed starter of the Edmonton Oil Kings and surprisingly is not undefeated in 11 starts. I don’t know what the Oil Kings are doing as a team offensively, because I’m not sure how you lose two games in regulation and two games in overtime or shootout with this guy in goal. As a surprise to no one, he was named the WHL’s goaltender of the month on Tuesday.

After drafting early Calder Trophy candidate Moritz Seider sixth overall in 2019 and Cossa 15th overall in 2021, I guess we shouldn’t be questioning the decisions of Detroit Red Wings’ general manager Steve Yzerman anymore. Early on, it appears he’s selected two gems that will be key parts of his team in the future.

Check out THW Prospect Corner on The Hockey Writers YouTube channel every Sunday as Matthew Zator, Peter Baracchini, and Greg Boysen bring you all the latest happenings around the prospect world. Also, stay tuned for the Prospects of the Week column every Monday.