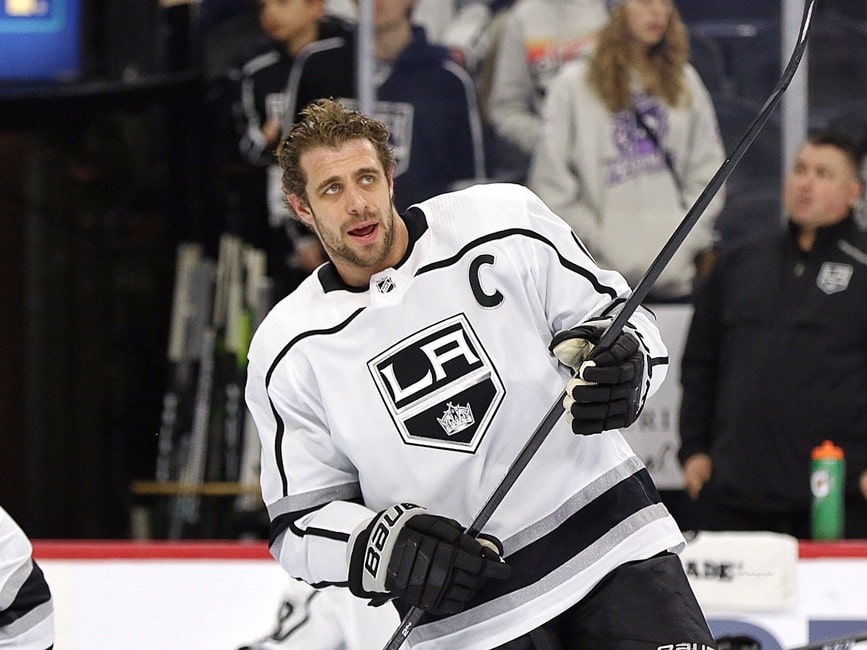 It has been a difficult start to the season for the Los Angeles Kings, as their 3-5-1 record places them 26th in the league. Early injuries to key players have only added to their challenging start, but with two straight wins, there’s hope that this team has turned the corner. Despite the poor start to the season, the team’s top-six forward group has been magnificent and is one of the best groups in the league. They aren’t perfect and they still have room to improve, but they have been the driving force for the Kings through the early part of this season. In this piece, I’m going to look at what the stats say about these lines, and why they work so well.

Sunday’s game against the Buffalo Sabres was the first game this season that the Viktor Arvidsson-Anze Kopitar-Dustin Brown line has been split up this season, and Arvidsson going into COVID-19 protocol was the only reason this happened. There’s a reason coach Todd McLellan has kept this line together all season, they’ve been dominant.

What the Stats Say: A common theme for both lines is incredible analytics. The top line’s expected goals percentage (xGoals%) is 62.8%, good enough for sixth in the league. Meaning they should score 62.8% more than they conceded and they lead the league in expected goals for. But does this translate into real production? Kind of, they’ve marginally underperformed their expected goals, five, and have conceded roughly an equal number of expected goals and real goals with three against.

Related: Kings Should Move Gabe Vilardi to the Wing

They also post some of the league’s best possession metrics, with a 55.5% Corsi for Percentage (CF%) and a 60.4% Fenwick for Percentage (FF%), good for 12 and fourth in the league. So, the stats say this is a line that should heavily outscore their opponents, and heavily outshoot their opponents. This is a relatively small sample size, just eight games into the season, but the eye test matches up with the stats, as this line has dominated almost every game they’ve played in.

Why They are Successful: It must be said that a big reason this line has been so successful, is the blazing hot start Kopitar has had. He’s been one of the best players in hockey so far and is likely inflating the production of this line. Fortunately, Kopitar is a truly elite center who can carry a line for the whole season. His numbers are definitely unsustainable, specifically his shooting percentage of 25%, but he can continue to dominate games. He brings the full package to this line, goalscoring, playmaking, and incredible defensive play.

Another big reason I’m confident in this line continuing to succeed is Arvidsson, while Kopitar’s shooting percentage is unsustainably high and will drop, Arvidsson’s should increase. He’s currently shooting at 6.3%, close to his 6.6% last season, but almost half his career average of 11.4%. With this in mind, even when Kopitar’s shooting percentage inevitably drops, Arvidsson’s rising should leave the line scoring the same number of goals. He brings more than goals though; he is an incredible forechecker and puck carrier who creates a ton of offense for his team. He looks a little snake-bitten and frustrated right now, gripping his stick too tight and missing some chances. But I expect him to find his groove soon.

Then there’s Brown, playing the same physical, gritty game he’s played since entering the league. He can’t produce like he used to, but he’s still an effective player. He’s leading the team in hit, with 21, and is tied for fourth on the team in points, with five. He brings experience, physicality, and peppering the net, leading the team in shots on goal with 34. He isn’t an elite power forward anymore, but he’s still productive. I think if things go wrong for this line in the future, he’s the first player to get moved, but he has earned his spot on this line and deserves to be there.

There was a lot of talk during the offseason about what kind of impact Phillip Danault would have after he signed a six-year, $33 million contract during the offseason. The early signs are great, as the line of Alex Iafallo-Danault-Adrian Kempe, has been magnificent so far. Statistically, the best possession line in the league, if they can continue converting their chances like they did this past weekend, they’ll be one of the most dangerous lines in hockey.

What the Stats Say: Like I just mentioned, statistically, they’re currently the best possession line in hockey. They’re posting a 64.6% in both CF% and FF%, leading the league in both categories. They’re also 15th in xGoals%, with 54.9%. Their five goals 5v5 is tied for third-best in the league, with their 4.5 expected goals for placing them fifth in the league. So, they post the best possession numbers in the league, and score at one of the highest rates, making them a dangerous line. Surprisingly, their four goals against place them third-worst in the league. They’re still a net positive though, and the stats point to them being one of the league’s best lines.

Why They are Successful: Like the first line, the second line’s success starts with their center, Danault. He doesn’t provide nearly the offense Kopitar does, but his contributions across the full 200-feet can’t be overlooked. A big reason their possession numbers are so good is because of Danault’s proficiency in the faceoff circle. His 57.4% is a team-best, for players with more than 20 faceoffs. His puck protection is also very underrated, he’s very strong on the puck and rarely loses battles in either zone. Defensively, he’s come as advertised, always in the right position and active in helping out his defensemen. He’s a driving force behind this line having the best possession stats in hockey.

Iafallo has spent most of his career on the top line with Kopitar and Brown but was moved to this line over the summer. The main criticism of Iafallo throughout his Kings career has been a lack of production, well so far this season, those complaints are invalid. He’s grabbed eight points in nine games and is second on the team for both points and goals. Granted, half of these points have come in two games, it’s still great to see his hard work pay off with points. The only great skill he has is hockey I.Q., he doesn’t have a great shot, or hands, nor blazing speed, but he’s also not below average in any category. He outworks almost everybody and knows how to play an effective game, if he can continue producing at close to this rate, his $4 million cap-hit will feel like a steal. Coach McLellan certainly thinks he can keep it up as well, he had this to say when asked if Iafallo can be a 25-30 goal scorer,

“This guy is a good player. That’s why I think he can score 25 or 30. He slows the game down when he needs to. He’s in the right spot. He speeds it up he needs to. He can check.”

“He comes to the bench. He sits down, gathers his thoughts and goes and does it again. Low-maitenece. High production. I think he can score 30.”

From (Doom and gloom lifts for the Kings as Alex Iafallo shines — does he have 25-goal potential?) Lisa Dillman, The Athletic, 11/1/21

The final member of this line, Kempe, is a divisive one amongst Kings fans. Some fans love him and want to see him in the top-six every night, while others are less convinced and want him closer to the fourth line. Kempe can be a frustrating player because he has all the tools to be a dominant player but can’t seem to put them together. What I will say is, the things he does well, he does very well.

Mainly, this is carrying the puck into the zone and generating offense. He’s one of the league’s better players at carrying the puck into the zone with possession and creating chance after entering the zone. He also creates plenty of shots, whether it be shooting the puck himself or setting teammates up to shoot, he gets pucks on net. Where he struggles, is adding quality to the high quantity of shots he creates. He struggles to apply the finishing touch with his shot or pass, leading him to frustrate fans, and I’m sure coaches. But he’s instrumental in this line’s ability to dominate possession, with his incredible ability to carry the puck.

Kings’ Top Six Not an Issue

The Kings’ 3-5-1 record doesn’t indicate a team with one of the league’s best top sixes, but that is the case. This top six is dominating game after game but is getting little support from their bottom six. The team has struggled to find the right combination of players in the bottom half of their lineup and it’s hurting them. It is also fair to point out that the second line was struggling for goals until recently. But, with Rasmus Kupari playing excellent hockey as the third line center, Lias Andersson returning over the weekend, and Andreas Athanasiou returning soon, that bottom six might improve quickly.