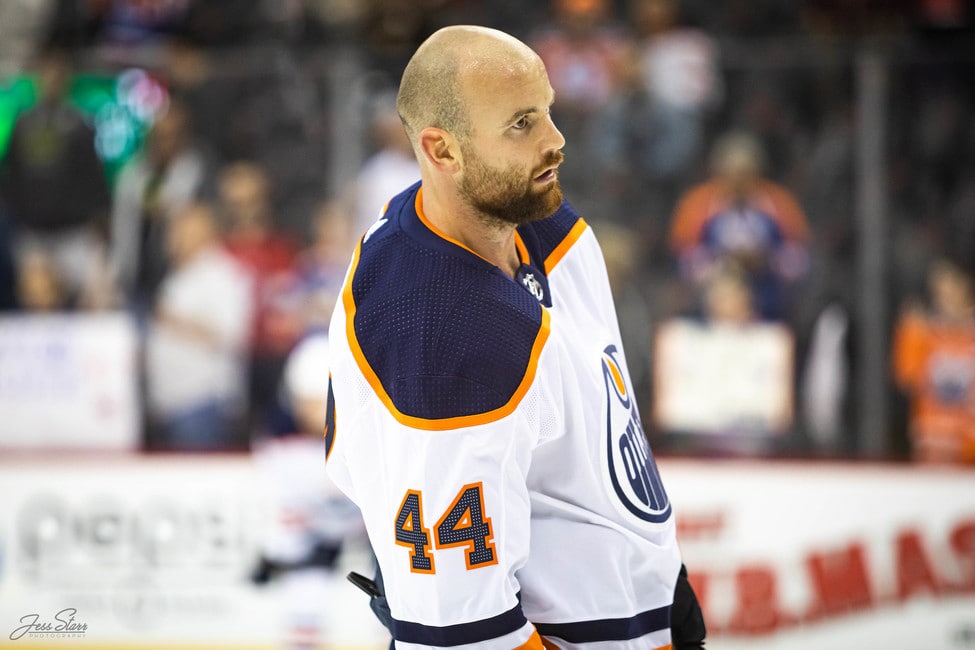 In anticipation for the upcoming 2021-22 season, we are going to take a look at possible players on the Edmonton Oilers that may find themselves in a different city by the end of the season. These players may have had down years, and are not projected to bounce back. Some players may also be collateral in a return at the trade deadline to acquire players that will help with a deeper playoff run.

Three players in that are in mind who could be on the move are Zack Kassian, Mikko Koskinen, and Tyler Benson.

After consecutive seasons scoring 15 goals with the Oilers, Kassian had a down year after being bumped down the lineup. Even if he can bounce back to a certain extent, his price tag may force the hand of Ken Holland to deal him away. Though the team may ride it out for one final season, the Oilers could be in a position to go deeper in the playoffs and win now.

A team needs everyone firing on all cylinders, and starter Mike Smith will need some rest here and there. If Koskinen isn’t performing up to standards, we could see him swapped for a more reliable backup. This can be one of the last opportunities that Benson has with the Oilers’ team, as he is reaching that age where the team has given him a good opportunity to earn playing time and contribute at the NHL level. If there is no progress made this season, expect Benson’s name to be on the trade block, even as soon as the trade deadline.

Kassian was brought over to the Oilers in 2015-16 in a deal that attempted to increase the toughness in their lineup to compete against the Western Conference. Well known to be the conference that is more physical, Kassian played a part to produce that for the Oilers. This was all fine when he wasn’t being overpaid to do this job. His last three contracts saw him make south of two million average annual value (AAV), a good deal for a player that brings toughness and grit while also being able to contribute offensively to a certain degree.

The problem is his most recent deal that saw him sign a four year $3.2 million AAV with the Oilers. There wasn’t much foresight when anticipating what this contract would look like for the Oilers a couple years in, never mind in just the first year. After earning playing time alongside Connor McDavid on the top line, Kassian’s numbers were inflated by a large margin.

The Oilers are going to have to see 2017 playoff Kassian again to reassure them why he needs to be on this current roster. With expectations high in Edmonton, this style of hockey can be just what they need to push past difficult opponents.

The top line has longed for wingers that can keep up and play consistent hockey. No names have been able to stick until last season when Jesse Puljujarvi made his return to the Oilers and earned that spot. Puljujarvi is younger, more talented, and has a higher ceiling than Kassian with his age and skillset. While this off-season saw Zach Hyman in a long-term deal to play on the left side of the top line. This, without a doubt, forces Kassian down the lineup. Kassian will have to stay healthy in order to preserve consistent playing time as well, since in 2020-21 he was lost in the shuffle for much of the year, recording 5 points in 27 games. Without the points being produced at a similar level, he will have to play to his strengths, and hope that earns him time. But with other hungry forwards also competing for spots in the bottom-six for a lot cheaper, Kassian could find himself as the odd man out.

Koskinen is an interesting player to watch in 2021-22. In a backup role with less games, he has done surprisingly better at times than what people give him credit for. Though his glove is still a huge issue, the size is there if he is ever able to tighten up in net. His $4.5 million AAV has been the front of all the criticism, after signing a three-year deal part-way through his first season with the team. Of course we can’t criticize the player for getting paid, as it is up to management to manage the cap. But Koskinen has not earned the money he was given. A team will have a much harder time succeeding when their backup is getting overpaid by $2+ million, when that money could be allocated to bring in a player of higher caliber.

The Oilers did hold off on buying out or trading Koskinen to this point, but a few factors may have gone into that decision. They bought out James Neal’s contract earlier this off-season which paid more and had longer term. It seems they prioritized the amount of money they could save and who could be easier to move. With one year remaining on his deal, Koskinen is definitely an easier option to move at any point without giving up too much alongside him as far as assets go. If a goalie is performing well on a team that decides they can’t compete for a playoff spot, that could create an opportunity to make a 1-for-1 swap with a low-end draft pick attached.

If Koskinen returns to form and steals starts away from Smith, the $4.5 million contract will be manageable for this season and the Oilers can run a strong two goalie system for this year. If not, Koskinen could be on the move sooner than later to help the Oilers separate themselves from the weaker Pacific Division. The Oilers have Alex Stalock waiting for his shot with the club, and may see time this season.

Looking a little younger, Benson could be a player to watch. He has reached that age when he should be competing for a spot in the NHL. A very productive player in the American Hockey League, he produced 141 points in 156 games. To go along with that, he produced 12 points in 16 playoff games in the AHL. He and the Oilers hope that this production can carry over to the NHL and allow him to start to play more regularly.

Over the past couple off-seasons, the Oilers have re-stocked their prospect pool and have multiple players that should be competing for spots in the NHL soon. If Benson hasn’t popped off by then, he should easily be pushed out. But if he makes significant strides this season and makes the Oilers team out of training camp, they might think about keeping him around. Close behind Benson are wingers Raphael Lavoie, Carter Savoie, Tyler Tullio, and Xavier Bourgault. A strong training camp could prove very helpful towards quicker opportunities.

Benson has reached the end to be considered a prospect, as with seven games played in 2019-20, he only needs six this season to be considered a rookie. He could be a good addition as a throw in to a larger trade. He could also be a result of a swap with an equally talented young player if both are struggling. We’ve seen this many times before from teams, and it could go well for both teams involved, or maybe just one.

The Oilers should certainly be in a position to upgrade their roster during the season, unless things go horribly wrong. Even if the team falls apart, Kassian, Koskinen, and Benson could always be options for other teams. Kassian’s biggest strength is his physicality, so another team preparing for the postseason may look to add toughness. If a good start is on the horizon for Koskinen, injuries happen, and he could become very appealing with retained salary on the Oilers’ end. Benson is young and is an RFA at the end of the season, so rights would stay with any team that acquires him. The Oilers hope that all of these players work out in the short term and are able to get the most out of them, but don’t be surprised if any of them are in different colours by next off-season.

Longtime Edmonton Oilers fan with a background in hockey analytics. Have enjoyed following and writing about the Oilers and the NHL for some time now.