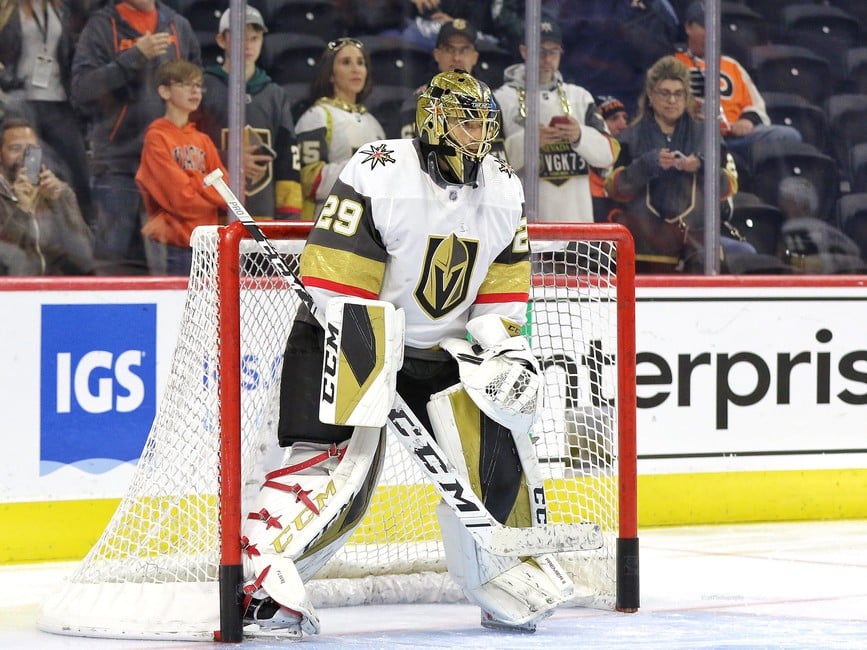 After weeks of speculation that linked all parties involved, the Chicago Blackhawks have acquired Marc-André Fleury from the Vegas Golden Knights. In the exchange, Vegas receives prospect Mikael Hakkarainen while Chicago takes on Fleury’s entire $7 million salary for next season.

This trade has certainly raised some eyebrows and rightfully so. Vegas and Chicago currently sit at different ends of hockey’s power rankings, so there’s a lot to digest with regards to how it benefits both.

Fleury, a proven veteran netminder who appears to still be playing at a peak, is joining a team that was proclaiming their rebuild as recently as last offseason.

Adding experience is certainly necessary to help mentor the youth along through such a process. However, this 36-year-old doesn’t seem like he’s ready for a role that would limit him to less playing time. Besides, if Chicago wants value from their newly added cap hit, Fleury needs to be in that net as much as possible.

Throughout his 17-year NHL career, Fleury has accumulated a record of 492-276-82, with a goals-against average of 2.55, a save percentage of .913, and 67 shutouts. He also has three Stanley Cups. What’s more, is that 2020-21 saw some of his best numbers to date, across his entire stat line. As evidenced by his Vezina Trophy and William M. Jennings Trophy.

While the case can be made that Chicago is looking to speed up their progress, and that adding a No. 1 goalie is certainly a pivotal piece towards doing so, it casts confusion with regards to Kevin Lankinen‘s place in it all.

Not only was Lankinen justifiably protected in the recent NHL Expansion Draft, but his impressive rookie campaign made it seem clear that the 26-year-old was the obvious choice to be Chicago’s starter for at least the foreseeable future. At one point, anyway.

On the flip side, despite how the organization reportedly mishandled their internal communications regarding the transaction, this isn’t as confusing of a deal as onlookers may initially suspect from Vegas’ standpoint.

A case can be made that the Golden Knights did not get much in return for a future Hall of Famer, especially since Hakkarainen has yet to see any NHL action. While the 23-year-old adds some depth at centre to the Golden Knights’ system, he’s far from aligning with the likes of Fleury at this point in his career.

Yet, the financials involved need to be accounted for. It’s not just about what the Golden Knights lost, but rather what they gained as a result of this move. This is a franchise that had their work cut out for them with regards to their salary cap situation, so shedding $7 million is a definite win in that respect. Vegas now has over $12 million to play with.

There are already a number of contract renewals Vegas has to manage heading into 2021-22, let alone the additional negotiations that will follow by season’s end. Having a budget to work with will be essential. Even if this means the Golden Knights have to sign another goalie, they’ll surely be bargain-hunting for a backup with Robin Lehner their undisputed starter at this point.

With his talents secured until the conclusion of 2024-25, Lehner was already been positioned to take over his new role. While it once seemed like he and Fleury were an unmatched tandem throughout the league, this shuffle essentially leads Lehner straight towards sitting alone atop Vegas’ throne.

Important to note that while teams can make trades that send players any which play, those respective athletes still have a choice in the matter. Perhaps not always with regards to the organizations involved, but certainly in terms of whether they show up or not.

The fact is, Fleury could simply opt to retire. This would essentially turn the tables on who gained what in this transaction. While each club would then be off the hook from paying his annual salary, Vegas would earn the edge by having added an unproven prospect to their system while also freeing up their financials along the way.

Knowing that this was a potential reality, is it possible that both sides were in on orchestrating such a move simply to maneuver the money involved? Whether or not Fleury flies to Chicago will clear up any confusion.

After already enjoying a resume full of success and achievement, it’s hard to imagine that this is how Fleury drew up the conclusion to such an illustrious career. That said, it’s his right to choose what comes next.

Instead of seeing Fleury in a Blackhawks uniform at the start of next season, we may have already witnessed his last game played in the NHL.

Freelance thinker, paying too much attention to digital aesthetic. Oxford comma enthusiast. Spider-Man supporter. Sports fan, with two favourite hockey teams. If the Blackhawks and Maple Leafs ever meet in the Stanley Cup Final, you can find me wherever they’re playing that night.

Check out more of my work at mralwayswrite.com.