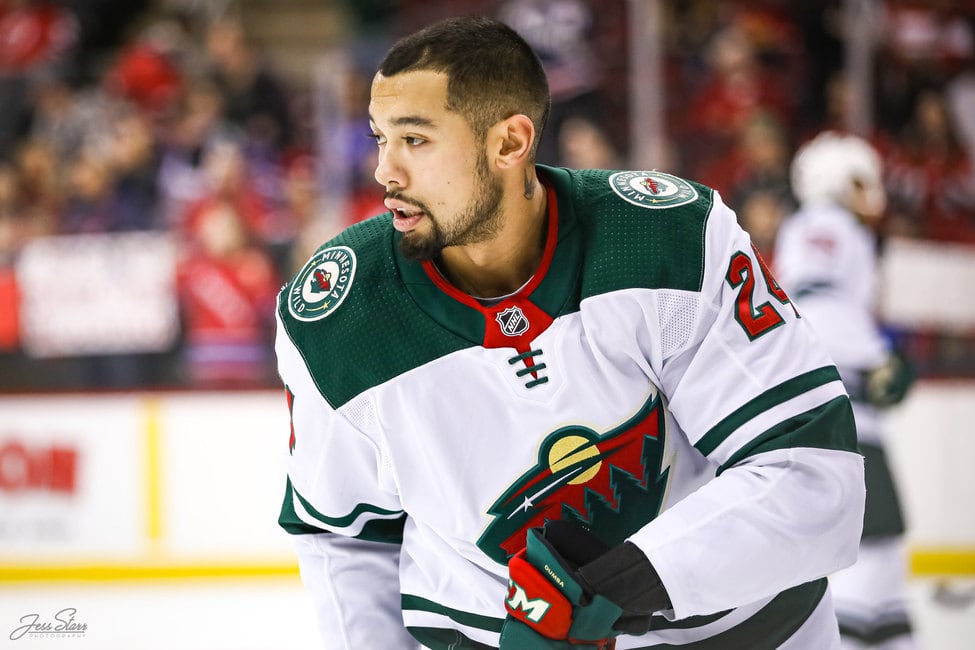 Upgrading the New Jersey Devils’ defense is a must for general manager Tom Fitzgerald this offseason. They’ve had their name connected to a few blueliners already, including prized free agent Dougie Hamilton (From ‘SNAPSHOTS: Rod Brind’Amour opts to stay behind the Carolina Hurricanes bench … GM Don Waddell listening on Dougie Hamilton’, The Ottawa Sun – 6/17/21). And they’re sure to be connected to more as the offseason continues to ramp up.

One reason for that is because the Seattle Expansion Draft is a little less than a month away. Teams will have to trade players they can’t protect or risk losing them for nothing to the Kraken. A club in a precarious situation on their blue line is the Minnesota Wild. They have three defensemen — Ryan Suter, Jared Spurgeon and Jonas Brodin — who have no-movement clauses and must be protected from Seattle unless they waive their NMCs.

That could mean Matt Dumba, who only has a modified no-trade clause, is the odd man out. The Wild likely don’t want to lose him to Seattle for nothing, so they could look to deal him before the expansion draft on July 21. If so, the Devils should be one of the teams who pursue a Dumba trade. Let’s take a look at why that’s the case.

Dumba has been one of the Wild’s top defenders for quite some time. He’s more of an offensive defenseman than an elite shutdown blueliner, and the numbers seem to bear that true. He’s averaged 36 points per 82 games over the last three seasons and has reached double-digit goals four times in his career, though not since the 2018-19 season.

Related: Wild Have Plenty of Potential Suitors for Matt Dumba

Another thing Dumba does well is his ability to move the puck, something you’d expect from an offensive defenseman. He excels in transitioning the puck out of the defensive zone with possession. And he also enters the offensive zone with puck possession in the 71st percentile of NHL defensemen. (Note: this graphic includes the 2016-17 campaign because his data was not tracked the following season):

If there’s a knock on Dumba, it’s his defensive game. Once upon a time, the Wild played him against elite competition. But his ice time against opponents’ top lines has dropped significantly over the last two seasons. Here’s a look at his percentage of total ice time against elite competition since the 2016-17 season and how his Corsi for percentage (CF%) fared (via PuckIQ):

Aside from the 2018-19 season, Dumba has not handled elite competition very well — his CF% was below 50 percent in four of the five seasons listed above. However, he was 22 and 23 years old in 2016-17 and 2017-18. It looked like he hit his stride as a 24-year-old. But why did his TOI% against elite competition drop off so dramatically in the years that followed?

Dumba underwent surgery around Christmas 2018 to repair a ruptured pectoral muscle and ended up missing the rest of the season. Since then, he hasn’t logged the same kind of difficult minutes against opponents’ top lines. That could be the result of the injury affecting his defensive play. But it seems more likely it’s Dean Evason taking over as head coach full time in 2020-21. It’s probably not a coincidence that Dumba’s TOI% against elite competition was the lowest of his career this season with Evason.

And that’s not necessarily a bad thing. Dumba excels offensively, so giving him a role that puts him in a better position to succeed is what more coaches should be doing around the league. While Dumba can’t play the hard minutes that the Devils need on their blue line, there’s still a fit for him in head coach Lindy Ruff’s system.

Dumba Has the Right Skillset

More than a few reliable names (Elliotte Friedman, Bruce Garrioch, The Fourth Period) have loosely linked Hamilton and the Devils together. The Carolina Hurricanes have allowed teams to talk to Hamilton’s camp before free agency to gauge interest. How far the Devils’ pursuit of Hamilton goes remains to be seen. But if there ends up being some mutual interest, you can bet he’s going to be their top defensive target this summer. Their biggest need is finding a top-four, right-handed blueliner since P.K. Subban has only a year left on his deal. Hamilton is that and much more.

Still, if a pursuit of Hamilton doesn’t pan out and it’s clear the Devils are out of the running approaching the expansion draft, they’ll need a fallback option. Dumba is not the defenseman Hamilton is (who is?), but he’s a perfectly capable second-pair defender who can operate a power play. That’d leave Damon Severson in a top-pair role again. But for what it’s worth, his CF% against elite competition the last two seasons is about break-even. He can handle the assignments.

Now back to Dumba, there’s a lot to like about his fit with the Devils. He’ll be 27 years old in about a month, so he’s young enough to fit in with the timeline of Jack Hughes, Ty Smith and Nico Hischier hitting their strides in their mid-20s. He’s under contract for two more seasons at a cap hit of $6 million, which won’t be a problem for a Devils organization flush with cap space. That also makes them one of the few teams who can take on his entire cap hit without the Wild needing to retain salary because of the flat salary cap.

And most importantly, he should fit in well with Ruff’s up-tempo system. The Devils played a fast-paced game in 2020-21, Ruff’s first as the Devils’ head coach. There were flashes of what the team’s future under him could look like, especially before a team-wide COVID outbreak in February. But once their season resumed, it was clear there were still missing pieces on their roster, one being puck-moving defensemen.

Dumba may not be elite in transition, but he’s certainly above average. He has offensive upside and should help a Devils power play that struggled mightily this season. He wouldn’t be the missing piece that ascends the team into an NHL powerhouse. But he’d be a noteworthy upgrade compared to what they iced this past season.

What Devils Would Have to Give Up

The Wild are in a tough position when it comes to a potential Dumba trade. One plus is that his modified NTC doesn’t kick in until July 28, so they’re free to trade him anywhere before free agency begins. But teams will know they have to move him because it’ll be almost impossible to protect him at the expansion draft. I don’t think most GMs will be willing to give up their best assets for him because of that, so his price tag shouldn’t be outrageous.

The Devils acquired the New York Islanders 1st-round pick, which they obtained when they traded Kyle Palmieri to them at the trade deadline. That pick will end up somewhere from 29th to 32nd overall since the Islanders are in the semifinals. But my guess is the Wild would be satisfied with picking up a second first-round selection.

There’d also have to be a prospect going to Minnesota in return. But it’ll be hard for the Wild to get a blue-chip talent, given the position they’re in with the expansion draft. The Devils have plenty of depth in their farm system, so giving up a B-level prospect shouldn’t be an issue for them. That should cover the cost, however.

If there’s one catch to the Devils acquiring Dumba before the expansion draft, it’s that they’d have to protect him. But if anything, the Devils need defensemen to protect from Seattle. Severson is a lock to be protected, and perhaps Jonas Siegenthaler since the Devils used a 3rd-round pick to acquire him. With the current roster, Subban would likely fill the team’s third protection slot on defense. Acquiring Dumba would change that, though, and he’d earn that slot after Severson and Siegenthaler (or even Will Butcher). So there shouldn’t be an issue adding Dumba before July 21.

All in all, Dumba is a solid offensive defenseman who’d likely fit in well with how the Devils are trying to play. Hamilton will be their no. 1 target, but Dumba is a good fallback option if things don’t work out with Hamilton. He shouldn’t cost too much to acquire and fills their need for a top-four, right-handed defender. And if he ends up being the Devils’ marquee defensive addition this offseason, you could end up doing much, much worse.