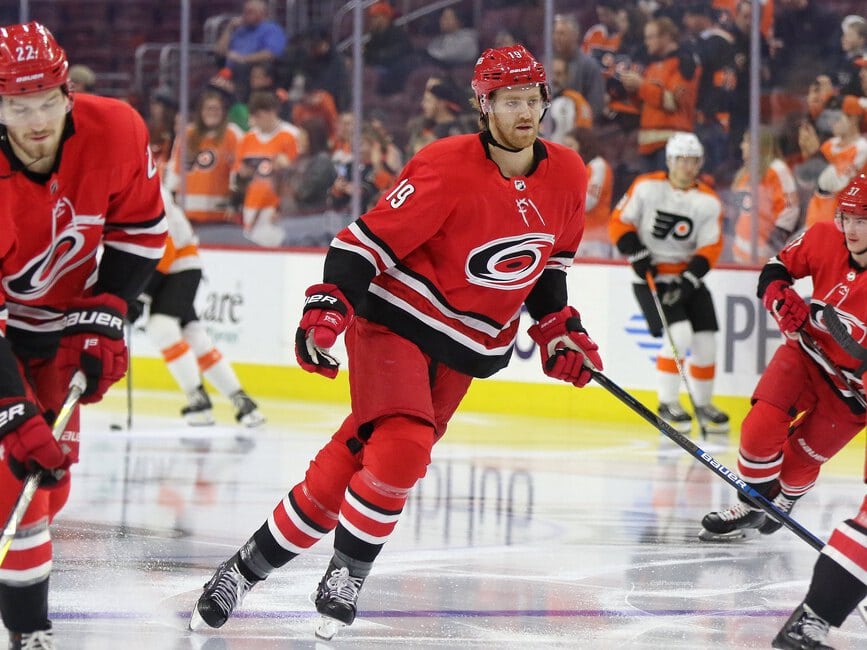 In today’s NHL rumors rundown, the Carolina Hurricanes are allowing defenseman Dougie Hamilton to speak with other teams about a potential extension. Meanwhile, a few scribes look at the offers the Colorado Avalanche might make to Gabriel Landeskog, the St. Louis Blues might make another pitch to Mike Hoffman, and Owen Power might not join the NHL next season.

Opening the door for a potential sign-and-trade scenario, the Hurricanes have told Hamilton he’s welcome to test the market ahead of free agency and speak to other teams. A report by Sportsnet’s Elliotte Friedman notes that the defenseman is expected to see what’s out there and then make a decision on his future.

Once he knows what the market will bare for his services, he can come back to the Hurricanes or tell them he’d like to be traded and the organization can move him, maximizing their return for a player they were likely to lose to the highest bidder anyway.

This isn’t the first time the Hurricanes have done something like this. They traded Joel Edmundson last offseason the Montreal Canadiens and they promptly signed the defenseman to a four-year, $14 million extension.

Hamilton recorded 42 points in 55 games during the 2020-21 campaign and will be a hot commodity on the open market.

“Buckle Up” When It Comes to Rod Brind’Amour

In other Hurricanes news, Friedman noted during his latest 31 Thoughts podcast that he received a text from someone that said, simply, “Buckle up” when it comes to head coach Rob Brind’Amour. It wasn’t entirely clear what that meant but Friedman wondered if maybe Brind’Amour would stay in Carolina in a non-head coaching capacity role.

Friedman added that there are teams who want to talk to him and take their shot, even if they know they aren’t likely to land him. The New York Rangers and Seattle Kraken are rumored to be among the teams with interest.

Avalanche to Offer “Take It Or Leave It Deal” to Landeskog?

Mike Chambers, Mark Kiszla and Ryan O’Halloron of The Denver Post write that they’re not sure what approach the Colorado Avalanche will take with Landeskog as a free agent. Some think he’s a priority, others think he’s not based on his lack of production against the Vegas Golden Knights.

Landeskog was a stud in the St. Louis series and I remember thinking then he would absolutely be the free-agent priority signing. Not so sure now. Right now, the club might make him a take-it-or-leave-it offer of around $5 million annually and not at his preferred length in years.

In this scenario, Chambers is saying the Avs will gamble on the fact he doesn’t want to leave or move his family. O’Halloron notes that the alternative is a bad team with salary-cap space like Los Angeles or Anaheim offering him the kind of money he can’t or won’t say no to.

Could Hoffman Return to Blues?

Blues insider Andy Strickland writes that pending UFA Mike Hoffman hasn’t necessarily ruled out a return to the Blues next season. He writes, “St. Louis would obviously need to show him some love on a potential deal. Had a decent amount of interest last off season and he’ll have some options again.”

It’s an interesting report considering there were rumors at the trade deadline last season that the Blues might actually be open to trading Hoffman even though he was relatively productive and had signed a one-year, team-friendly deal to maximize his value for this season. Strickland adds, “Last offseason he received a good amount of interest and the same is expected this offseason.”

According to Adam Kimelman of NHL.com, the potential No. 1 overall pick in the 2021 NHL draft might not be joining the league next season. Owen Power has commented that he is leaning towards returning to the University of Michigan next season.

“I think right now I’m probably leaning more toward going back to school. It’s something I’d like to do, trying to get the true experience of playing college hockey. At the end of the day, it obviously depends on what the team wants and what everyone around me thinks is best. I don’t think there’s really a bad option, but I’d say I’m leaning a bit more toward going back to school right now.”

One has to wonder if this changes how the Buffalo Sabres feel about drafting him first overall. They are likely looking for an impact player who can come in and help immediately.