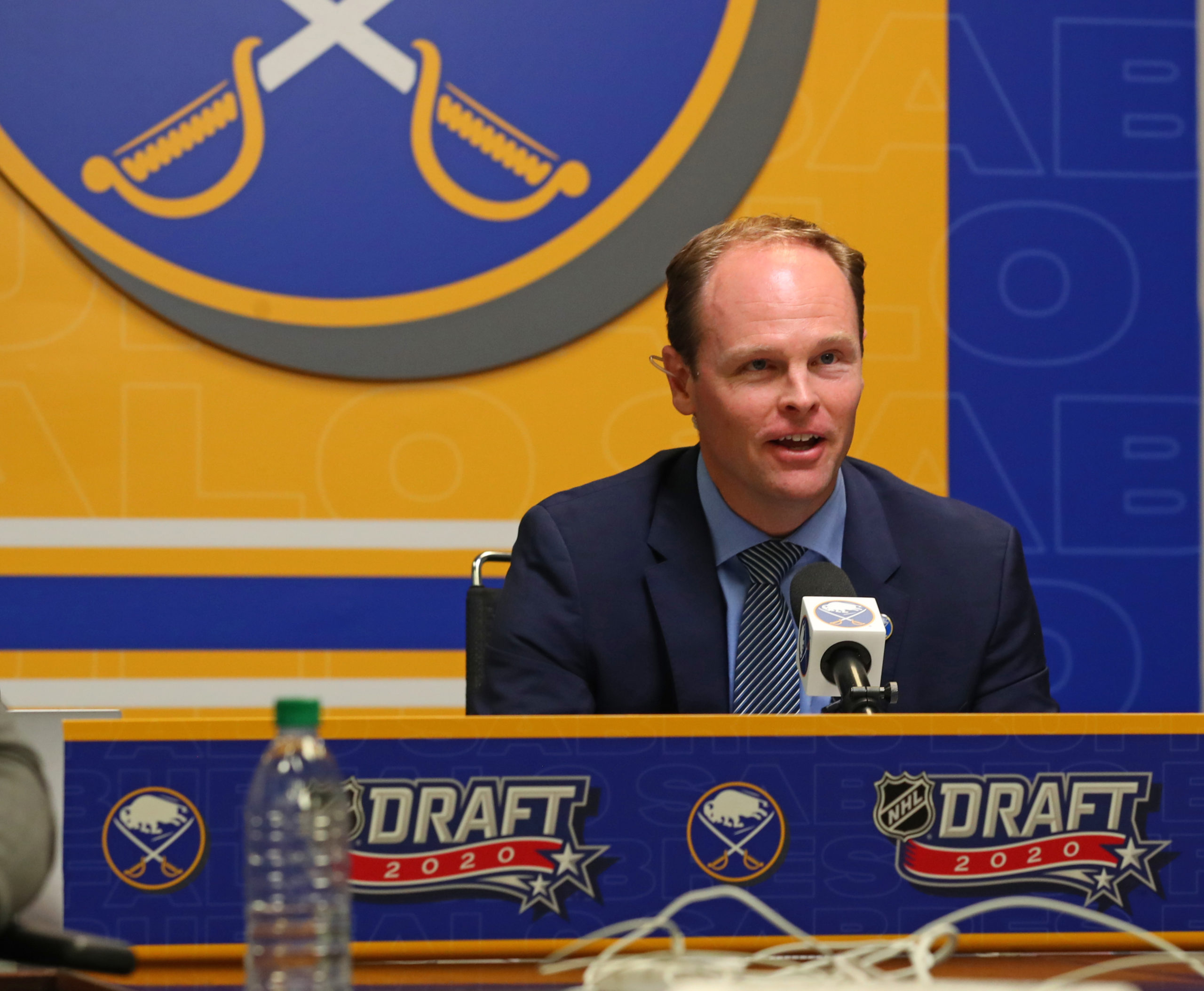 In today’s NHL news and rumors Buffalo Sabres general manager Kevyn Adams spoke publicly about Jack Eichel’s comments on a disconnect between the player and the team when it comes to Eichel’s health. There are also a few teams rumored to be front runners in possible future trade talks. There is an update out of Columbus that the Blue Jackets might be willing to trade Patrik Laine and there is talk about which coaching candidates might be of interest to the New York Rangers who fired David Quinn on Wednesday. Finally, the Toronto Maple Leafs are getting Frederik Andersen back into the lineup.

Adams Speaks, Kings to Be Players for Jack Eichel

As per Frank Seravalli of TSN, the Los Angeles Kings are expected to be serious players and will likely make a pitch to acquire Eichel from the Sabres this offseason. Among the other teams mentioned by the TSN Insider Trading panel, — Minnesota Wild, New York Rangers, Anaheim Ducks — Seravalli notes that the Sabres will do their best to avoid trading Eichel to a division rival. The Kings are about as far away as the team can trade him.

“The Los Angeles Kings have seven players on Craig Button’s Top 75 affiliated prospect list, they have the goods to bring a guy like Jack Eichel to SoCal, and more importantly, they’ve had interest. I can tell you that the Kings have had a cursory conversation before the deadline with the Buffalo Sabres about acquiring Jack Eichel and I expect that to pick up in big way this summer.”

Meanwhile, Adams spoke with the media today. He said the Sabres want Eichel to be healthy and had no problem with a second opinion, noting there was constant communication. Says doctors agreed on a “conservative, rehab approach.: He added that Adams backs the expertise of the medical staff who believe Eichel could avoid surgery. He understands why Eichel has considered a different option (cervical disk replacement), “but team is not comfortable with it because there is not a history of NHL players coming back from it.”

Aaron Portzline of The Athletic wrote an article about teams that might be interested in trading for Eichel. When it came to the Columbus Blue Jackets, one of the interesting things Portzline wrote was that the Blue Jackets are more open to trading Laine now than they’ve ever been, specifically at the NHL Trade Deadline.

Patrik Laine had a rough first season in Columbus, and there are those in the organization who would support him being a one-and-done.

Laine’s body language was dreadful most nights. The Blue Jackets don’t have a center who can play the game at his pace, absolutely, but the bigger issue was his energy level and passion to play the game.

Portzline adds, “Kekalainen is said to be more open to trading Laine now than he was at the trade deadline. (Does Laine, Korpisalo and the two late-first-round picks get Eichel?)”

Rangers Will Look For Experienced Coach

The New York Post’s Larry Brooks broke the news that the New York Rangers fired head coach David Quinn on Wednesday. He is also reporting that assistants David Oliver, Jacques Martin and Greg Brown have also been let go by new general manager Chris Drury and a search for a new head coach will begin immediately.

As for who the Rangers will look to as the next coach of the team, Mike Babcock, Gerard Gallant, Bob Hartley, John Tortorella, Rich Tocchet, and Bruce Boudreau are just a few of the names on the market. It might be interesting to see if Travis Green of the Vancouver Canucks gets a look, assuming a contract extension isn’t worked out in Vancouver.

As per multiple reports, Maple Leafs goaltender Frederik Andersen will start the team’s game in Ottawa. This is his first NHL action since March 19. Mitch Marner on Andersen’s return tonight: “He’s worked his butt off to get back into the shape where he thinks he’s the best possible goalie he can be and we’re excited for that and we’re excited for him.”

In order to make the needed space to activate Anderson, Toronto assigned Rasmus Sandin to the Taxi Squad, and placed Zach Hyman on LTIR retroactive to April 18. This left them with $350,000 in non-prorated Salary Pool relief.