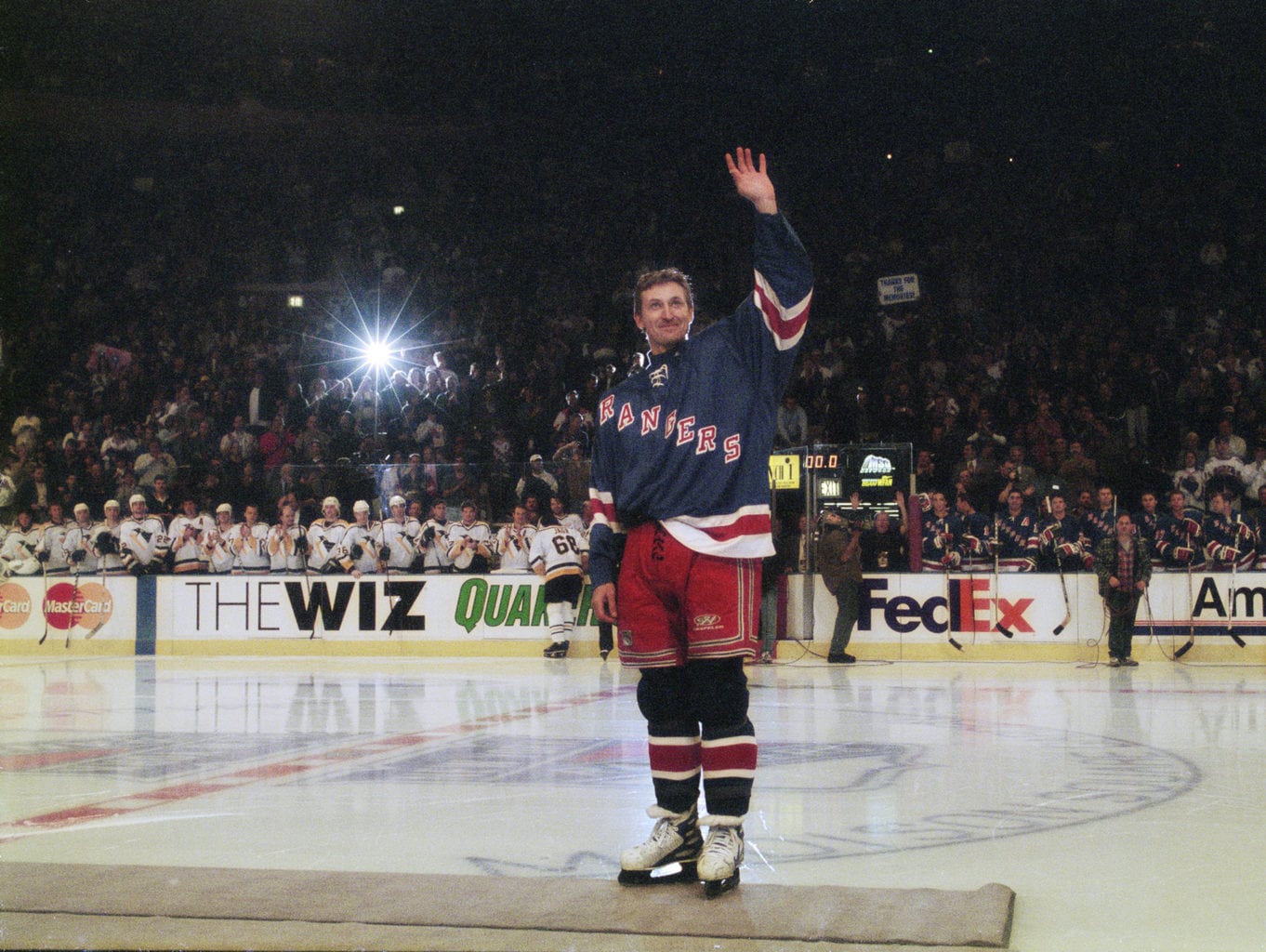 The 1998-99 season was a special one in New York Rangers’ history. It was the last season Wayne “The Great One” Gretzky played hockey. It was a time of mixed emotions throughout the hockey world. Tears, joy, reflection; and a changing of the guard would start to take place.

The Great One and “Mess” Reunite

After turning down a three-year contract with the St. Louis Blues worth $15 million, Gretzky signed a two-year deal with the Rangers for $8 million, plus incentives, as a free agent in July 1996. He would be reunited with his longtime friend and Edmonton Oilers teammate Mark Messier.

Messier told The New York Times’ Jason Diamos, “We’re adding a kind of guy to the team that I don’t think we’ve ever had since I’ve been here, and something has been missing on offense the past few years. He’ll elevate some players to a place where they haven’t been before. Is he filling a void we’ve been lacking? I think the answer to that is yes.” (from: ‘HOCKEY; Messier, Not Money, Made Gretzky a Ranger’, The New York Times – 7/7/96)

After signing the deal Gretzky had this to say from a Madison Square Garden press conference, “I’m probably one of the first free agents to ever come to New York that came for a less-money situation.”

He finished by saying, “It was a tough decision, but it just kept coming back to my gut feel. I guess probably what tipped the scale was the chance to play with Mark and the opportunity to get a chance to play with a team that is really focused on trying to win a championship.”

Close, but No Cigar

That season, they made it to the Eastern Conference Final before falling to the Philadelphia Flyers. The Great One led the way with 10 goals and 10 assists in the playoffs, but it wasn’t enough. Messier ended up signing with the Vancouver Canucks in the offseason which signaled the last time the two would ever play together and the last season either of them would make the playoffs.

Gretzky tallied 92 points in 80 games during the 1997-98 season with the Rangers, but they failed to make the playoffs for the first time since 1992-93. Gretzky was doing his best to mentor players like Alexei Kovalev and Marc Savard, however, the team finished 15 points shy of a playoff spot.

The final season played by “No. 99” was a disappointment for the Rangers and Gretzky statistically. The Rangers finished fourth place in the Atlantic Division, missing the playoffs by 13 points. Gretzky meanwhile only had 9 goals and 53 assists for 62 points in 70 games. It was Gretzky’s worst season by far in his historic 20-year career.

Gretzky’s last goal came at MSG on March 29, 1999, against the New York Islanders. In true Gretzky fashion, he scored the game-winner with just over two minutes left to break a 1-1 tie. The Great One always had a flair for the dramatic and on this night he didn’t disappoint. It was his 1,072nd professional goal. This surpassed Gordie Howe’s professional total when you combine both their WHA and NHL regular season and playoff statistics, including Howe’s one minor league season with the Omaha Knights of the USHL in 1945-46. Gretzky again showed one last piece of magic as the season and his career were coming to a close.

No. 99’s final game in the NHL was on April 18, 1999, against the Pittsburgh Penguins. Gretzky recorded an assist on a goal by Brian Leetch in a 2-1 overtime loss to the future team of Gretzky’s successor as the NHL’s most dominant player (of his era) Sidney Crosby. Jaromir Jagr who ranks second in career points behind Gretzky, scored the winner and Alexei Kovalev scored the other goal for the Penguins.

After the game, Gretzky was showered with love from the fans, and current and former players. He shook hands with the whole Penguins’ team and took a lap around the ice, then took a final group photo with his teammates. Several of Gretzky’s former teammates, family and friends were in attendance, such as Ulf Samuelsson, Glen Sather, Mario Lemieux, and of course Messier.

Most of the MSG crowd stayed to wish the greatest player who ever played the game farewell. Always gracious, The Great One made several curtain calls after originally heading to the locker room until he finally took one last skate around the Madison Square Garden ice. He waved to the fans while his eyes were filled with mostly tears of joy when he left the ice with his family for the last and final time. NHL Commissioner Gary Bettman said that no one in the NHL would ever wear No. 99 after Gretzky took his jersey off that day.

Gretzky took off his skates and went to the post-game press conference with his jersey on. When asked about his uniform he told the media, “Probably, subconsciously, I don’t want to take it off. I’m not going to put it on ever again.”

So after 1,487 games, 894 goals, 1,963 assists, totaling 2,857 points and four Stanley Cup Championships, not to mention countless other NHL records that will probably never be broken or even come close to being touched; The Great One finally waved goodbye to MSG and the hockey world in 1999. He took off his jersey and hung up his skates.

Scott Blair is an author and journalist from Los Angeles, Ca by way of Detroit, Mi.  Scott’s life has been shaped by uniquely diverse experiences in both of those places he calls home.  He is now traveling the world learning and growing as a human and a writer.  He was a professional hockey player and then turned to the arts becoming an actor for about 15 years.  His passions turned to poetry, prose, politics, and journalism when he got tired of the Hollywood machine and what it represents.