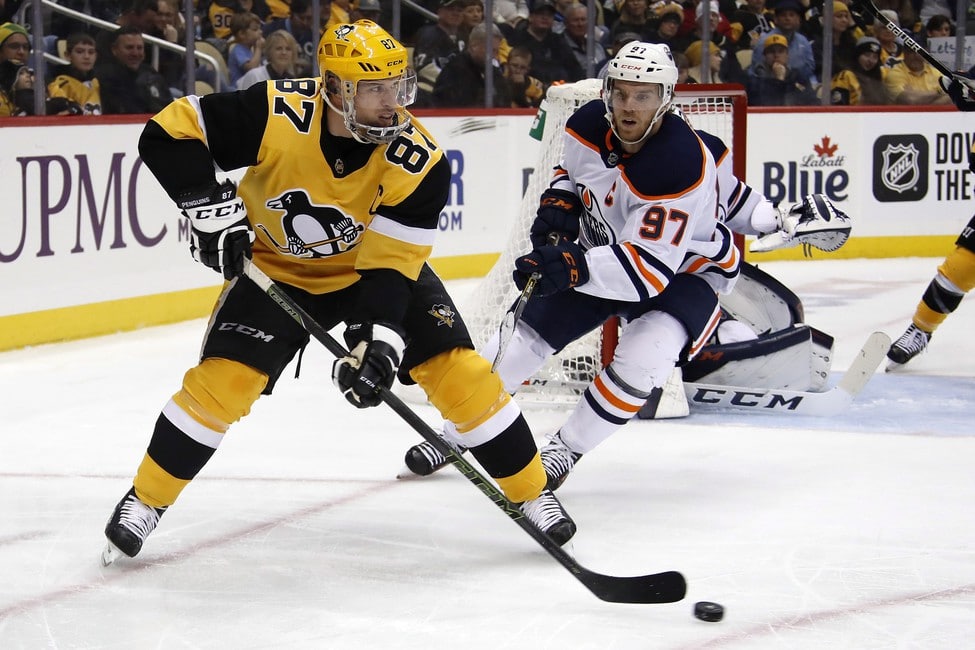 This date has been very eventful in the history of the National Hockey League. A generational talent in Pittsburgh was the youngest ever to hit a particular milestone. This date has been kind to goaltenders and has also given us plenty of memories in the crease. Let’s take our daily trip back in time to relive all the top moments from April 17.

It did not take very look for the NHL to take notice of Crosby. His rookie season of 2005-06 is one of the best by a first-year player. On April 17, 2006, Crosby picked up three assists in the Pittsburgh Penguins 6-1 win over the New York Islanders. His second helper on the night gave him 100 points for the season.

At 18 years and 253 days, Crosby became the youngest player to ever have a 100-point season in the NHL. He and Hall of Famer Dale Hawerchuk remain as the only two 18-year-olds to put up at least 100 points in an NHL season.

Dominik Hasek picked up his first career Stanley Cup Playoff shutout on April 17, 1994. Hawerchuck had assists on both Buffalo Sabres’ goals in a 2-0 win over the New Jersey Devils in Game 1 of the Eastern Conference Quarterfinals. Hasek would finish his career with 14 postseason shutouts, tied for seventh all-time with Jacques Plante and Ed Belfour.

On that same night, Darcy Wakaluk made his first start in the Stanley Cup Playoffs, and it was a memorable performance. He made 33 saves to lead the Dallas Stars to a 5-3 victory over the St. Louis Blues in the opening contest of the Western Conference Quarterfinals. Wakaluk led the Stars to a four-game sweep of the Blues. He lost Game 1 of the Western Conference Semifinals to the Vancouver Canucks before Andy Moog returned from injury.

On April 17, 1996, John Vanbiesbrouck made 42 saves to lead the Florida Panthers to their first-ever playoffs win with a 6-3 decision over the Boston Bruins. The Panthers made quite the showing on their first trip to the postseason. They eliminated the Bruins before beating the Philadelphia Flyers and Penguins on their way to their only Stanley Cup Final appearance.

Martin Brodeur became just the second goaltender in league history to score a playoff goal on April 17, 1997. With time winding down, the Montreal Canadiens pulled Jocelyn Thibault for an extra attacker. Moments later, Brodeur sent the puck down the length of the ice to cap off a 5-2 win in Game 1 of the Eastern Conference Quarterfinals.

On April 17, 2018, the Vegas Golden Knights beat the Los Angeles Kings 1-0 to become the first team to ever sweep a playoff series in their inaugural season. Marc-Andre Fleury made 31 saves to pick up his second shutout of the postseason. The Golden Knights allowed just three goals in the four games versus the Kings, becoming just the 15th team in NHL history to do so.

Maurice Richard scored his sixth and
final overtime playoff goal on April 17, 1958. His tally put the Canadiens up
3-2 on the Bruins in the Stanley Cup Final. Richard’s six postseason overtime
goals were the most in NHL history until Joe Sakic set a new record with his
seventh in 2006.

On April 17, 1973, Larry Robinson scored the first playoff goal of his NHL career. It came early in overtime as the Canadiens beat the Flyers 4-3 in Game 2 of the Stanley Cup Semifinals. At the time, he was only the second rookie defenseman to score an overtime playoff goal.

Don Kozak put his name into the NHL record book on April 17, 1977, scoring just six seconds into Game 4 of the Stanley Cup Quarterfinals. His early goal helped lead the Kings to a 7-4 victory over the Bruins, and it remains the fastest goal to start a playoff game in league history.

The Bruins and Islanders made sure the penalty box attendants at the old Boston Garden were kept busy on April 17, 1980. The two teams combined to set an NHL playoff record for most penalty minutes in one period when they combined for 248 in the first period. Each team received 124 minutes. The Islanders went on to win the game 5-4, thanks to an overtime goal by Bob Bourne.

On April 17, 1981, Denis Potvin became just the third defenseman in NHL history to have a hat trick in the Stanley Cup Playoffs. All three of his goals came on the power play, and he added a pair of assists in the Islanders’ 6-3 win over the Edmonton Oilers in Game 2 of their quarterfinal series.

Two years later, on April 17, 1983, Wayne Gretzky set an NHL postseason record with seven points against the Calgary Flames. The Great One had four goals, three of which were shorthanded, and three assists in the 10-2 victory in Game 3 of the Smythe Division Final. Gretzky had two more seven-point playoff games for the Oilers in 1985 and 1987.

On that same evening, Mike Ramsay of the Sabres joined Bobby Orr as the only defensemen to have to score goals in four straight Stanley Cup Playoff games. He helped Buffalo to a 4-3 win over the Bruins in Game 3 of the Adams Division Final.

Steve Yzerman set a Red Wings team record for most playoff games, on April 17, 2002, with his 155th appearance. He picked up an assist as the Red Wings lost 4-3 in overtime to the visiting Vancouver Canucks in Game 1 of the Western Conference Quarterfinals.

Content machine and copy editor at THW. Covering the Blackhawks and the AHL Central while providing your Today in Hockey History and Prospects News & Rumors columns. Regional scout/trivia host/podcaster.