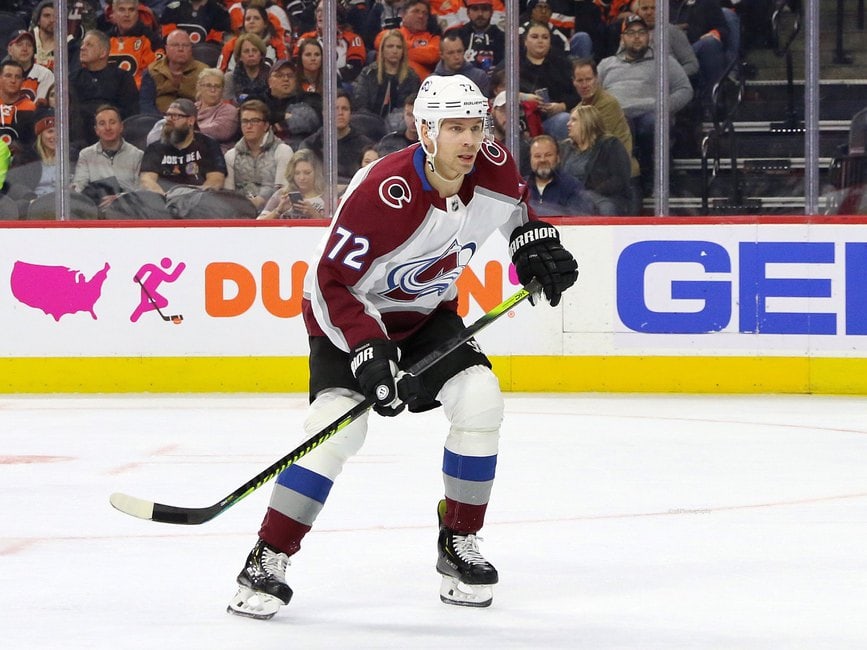 For the first time all season, after the final horn had sound, the Colorado Avalanche skated to center ice of Ball Arena and saluted a crowd. It was a triumphant celebration of what was arguably the best month in Avalanche history, one that propelled them from the playoff bubble to the top of the Honda West Division standings and tied with the Tampa Bay Lightning for first overall in the NHL. It had been over a year since Colorado had played a home game in front of a crowd, but for the jovial few lucky enough to be inside on Wednesday night, it seemed like it was worth the wait.

Mikko Rantanen and Gabriel Landeskog each tallied three points, Philipp Grubauer broke the record for most wins by an Avalanche goalie in a month, and Joonas Donskoi collected a hat trick just seven and a half minutes into the game as Colorado lambasted the Arizona Coyotes 9-3. Here are a few takeaways to glean from the Avs’ 12th straight contest with at least a point.

Donskoi’s hat trick in three and half minutes of game time was ludicrous. Each goal came in a different form, the first coming from him knocking in a loose puck that was sitting in the crease, the second from a cheeky tuck-in from behind the cage, and the last from a one-timer blast right between the faceoff circles.

The Finnish winger can’t miss right now. After a quiet start to the month, Donskoi scored nine goals in 10 games while tabulating six assists on the side. The career 12.5 percent shooter is rocking a 30 percent clip through more than half of this season and is showing no sign of wearing down.

The Donskoi, Tyson Jost, Valeri Nichushkin line is rolling for the Avs on both ends of the ice. Their emergence, headlined by Donskoi’s scoring bender, has been a leading cause in Colorado’s recent dominance. While regression is likely inevitable in the long term for the winger, so far, he’s been an invaluable part of the Avalanche this season.

Colorado on the March

On the first of March, the Avalanche lost 6-2 to the San Jose Sharks, falling to 11-7-1 and just one point ahead of the Los Angeles Kings for the last playoff spot in the division. Since then, the Avs have gone 12-1-3, earning 27 points in 30 days whilst collecting blowout wins at least a couple of times a week.

In total, Colorado outscored opponents 72-37 in March, or 70-31 after the San Jose game. They flexed the ability to dominate possession as well, attaining the majority of shots in all but one of their contests. Rantanen flew up the goal-scoring leaderboard, beginning April tied for second with Connor McDavid with 21 tallies, just three behind lethal scorer Auston Matthews.

Perhaps the most encouraging part of Colorado’s run is that it’s well-deserved. The process backs up the results, an inevitable result of the way the team had played for the preceding stretch of the season. The goals slowly started to trickle in as the month went on, starting with a 4-1 win over the Kings and culminating with the 9-goal outburst on Wednesday. But while the offence has cranked up, the defense hasn’t suffered for it. While the club has accumulated 1,236 shots on goal, the most in the league, they’ve only allowed 879, the second least. In all, as they’ve gotten healthier and luckier, they’ve reached their full, dominant potential.

Nathan MacKinnon was a quieter member of the Avalanche on the scoring sheet on Wednesday, but by the end of the game, he’d made plenty of noise. His temper boiled over following a kerfuffle with Coyotes’ star Conor Garland, but after some tussling, MacKinnon was polite enough to return Garland’s headgear:

Colorado’s star was fined $5,000 for the display of poor sportsmanship. While behavior like that should not be encouraged, it’s a good representation of frustrations that have likely boiled as teams have met time and time again in very close succession. It will be intriguing towatch if the violence continues through the month of April. (from ‘Was Connor McDavid’s Big Hit a Dirty Play?’, The New York Times, 3/31/21)

But for now, MacKinnon should probably stick to hockey and keep bowling on the side.

Avery is a writer covering the Colorado Avalanche. He is graduating in April with a B.A. in English and Mass Communication. He has previously worked for The Puck Authority covering the Rapid City Rush and for NGU Vision Media as their News Editor. He is a board game enthusiast and enjoys spending time with others.