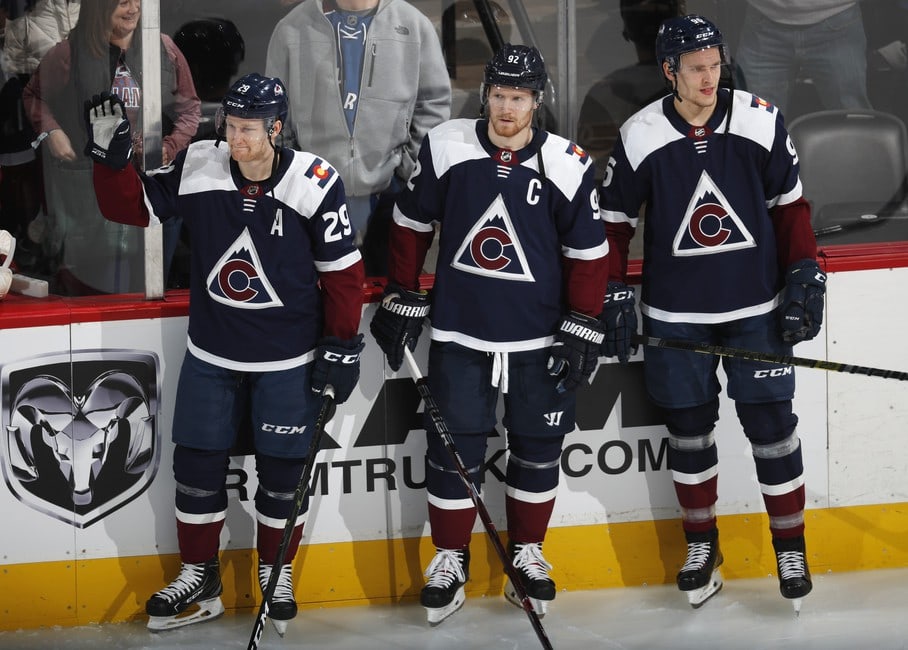 The Colorado Avalanche are playing in a video game right now.

The shots are getting absurd, and the top line was dominant on Thursday to set the tone for a 5-1 statement win over the Minnesota Wild. The win pushed Colorado’s winning streak to five games, as each member of the top line scored a goal.

They have one game left on a nine-game homestand, and have gone 6-1-1 through the first eight. Thursday’s win pushed the Avalanche into second place in the West Division standings, jumping over the Wild.

The top line for the Avalanche hammered the Wild net all night, scoring four of the five Colorado goals in the victory.

Mikko Rantanen racked up two goals – including another ridiculous backhand from a nasty angle – and two assists to lead the way. Nathan MacKinnon started the scoring at 11:10 the first (on Colorado’s 19th shot on goal in the first nine minutes), and the Avalanche were rolling.

MacKinnon also had two assists in the game, including one on Gabriel Landeskog’s power-play tally late in the second that pushed the lead to 3-1. Overall, the top line combined for four goals and six assists in the victory.

Rantanen has been on a tear, scoring four goals and five assists over the last four games. MacKinnon’s goal extended his goal-scoring streak to four games, and Landeskog has at least a point in four of his last five games.

Shooting the Lights Out

Colorado has been piling up ridiculous shot numbers throughout the five-game winning streak, but Thursday night was bordering on absurd.

The Avalanche outshot Minnesota 25-6 through the first period, and amassed a staggering 44 shots on target through the first 40 minutes. The total through two periods was a franchise record. They wound up with 55 for the game, which was easily a season-high – even with the recent barrage – and was the second-most in team history.

Six different players had at least five shots on goal on Thursday, including Cale Makar – who tallied six in his first game back after missing the last 10.

The Avalanche have had at least 41 shots on goal in four of their last five games – and they piled up 45 through the first two periods on Thursday. Colorado hasn’t had fewer than 30 shots on goal since recording 29 on Feb. 26 in a 3-2 win over the Arizona Coyotes.

But it’s not just the offense piling up chances. The defense has been holding teams down, too. Over the five-game winning streak, Colorado has outshot opponents by an average of 44.8-20.4.

Logan O’Connor, Pierre-Edouard Bellemare, and Matt Calvert aren’t going to lead the Avalanche in goals or points or even minutes. But they might know their roles better than anybody else on the team.

Colorado coach Jared Bednar started the fourth line on Thursday for their energy, and the result was an outburst that set off what was arguably the most dominant first period of the season for the Avalanche.

Bellemare won the opening faceoff, and Calvert and O’Connor combined for four shots on goal over the next 17 seconds. Colorado outshot the Wild 25-6 through the first 20 minutes, building a 2-0 lead.

O’Connor, Bellemare and Calvert have combined for only five goals and seven points on the season, but that’s not why they’re there. The Avs energy line are all part of the penalty kill, and they’re sent out to give the big guns a breather and wear out the opposition for maybe a minute at a time.

They did all of that and more on Thursday. While the points still weren’t there, the fourth line combined for 10 shots on goal in the win. O’Connor accounted for six of them – which set a career-high.

The Avalanche close out their nine-game homestand with another game against the Wild on Saturday afternoon.

Lifelong storyteller and experienced hockey reporter that has covered everything from major juniors to the NHL. Worked for various newspapers across Minnesota and North Dakota, and now covering the Colorado Avalanche for THW.