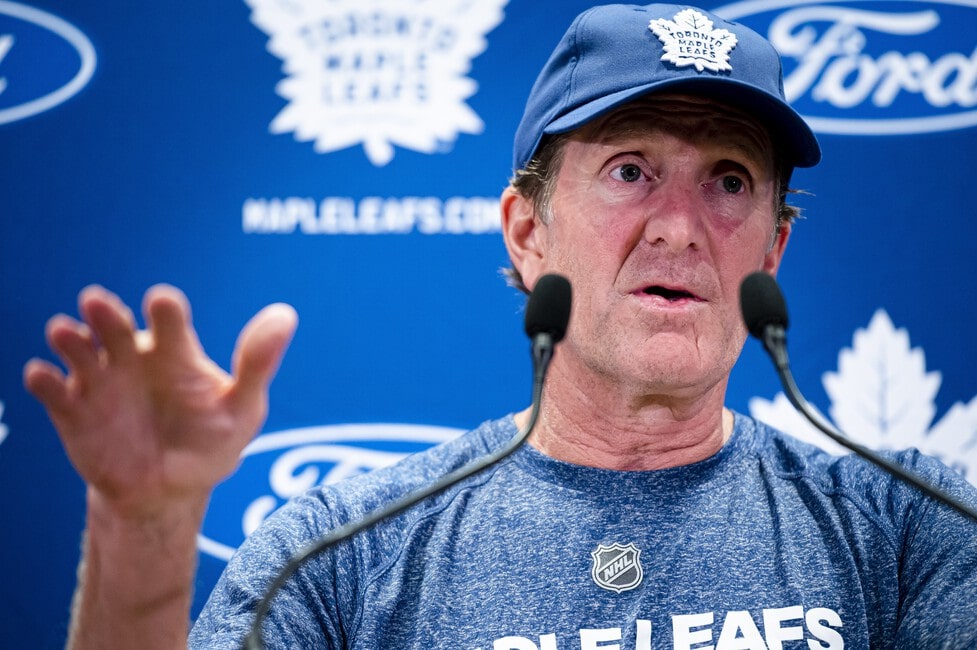 In today’s NHL rumors rundown, there is coaching news as the Montreal Canadiens have made a massive change behind the bench and former Toronto Maple Leafs head coach Mike Babcock had interesting comments regarding why he was relieved of his duties in Toronto. Vegas Golden Knights owner Bill Foley says the team was never close to trading Marc-Andre Fleury and the Edmonton Oilers haven’t talked to Adam Larsson about a new deal. Finally, the Buffalo Sabres are making a defenseman available in trade and the Detroit Red Wings have some players other teams want.

Canadiens’ GM Marc Bergevin’s job is officially on the hot seat. He’s the only person left responsible if the Canadiens continue to struggle as he relieved head coach Claude Julien and associate coach Kirk Muller of their jobs on Wednesday.

Bergevin made massive roster changes this past offseason and most insiders believed it would equate to a Stanley Cup contender being on the ice each night. That hasn’t happened. Now that Julien is gone and Dominique Ducharme has been given the interim head coaching job, Ducharme is Bergevin’s last line of defense as trades might not even save him if the Canadiens aren’t able to rebound.

TVA Sports Renaud Lavoie says that the Canadiens aren’t expected to make any additional coaching changes this season so Ducharme is the guy to close out the 2020-21 campaign. Lavoie also notes: “I’m told that last night loss was not the final straw for Claude Julien and Kirk Muller. The decision to let them go was made before and the plan was to announced it today.”

The Old Prof takes a closer look at the comments by Babock here, but the former Leafs coach is taking some heat on social media Wednesday for his remarks that he knew he was being fired by the Maple Leafs the moment former GM Lou Lamoriello left the organization for the New York Islanders.

While Babcock admits the team didn’t have great playoff success, he talked about how the club had no players prior to his arrival and they wound up in a great spot, and bragged he coached the team during a season that holds the record for most franchise wins. He noted that he’s partly responsible for Mitch Marner, Auston Matthews and Morgan Rielly becoming men and hinted that he was only let go because he wasn’t GM Kyle Dubas’ guy.

They are interesting remarks considering Dubas kept him as the team’s coach for 18 months after Lamoriello left and the new GM often went to bat for Babcock when media was calling for him to be let go after poor playoff success in 2019.

In other Maple Leafs news, forward Joe Thornton, defenseman Jake Muzzin, and goaltender Frederik Andersen will remain out of the lineup tonight. Keefe said on the status of Andersen: “From what I’m told, he’s progressing well.”

As part of the latest 31 Thoughts report, Elliotte Friedman noted Golden Knights owner Foley’s appearance on Andy Strickland and Cam Janssen’s podcast where he said he doesn’t want goaltender Marc-Andre Fleury to be traded. “He never came close to be part of a deal,” said Foley. In fact, the owner noted if the team had come to him and asked about moving Fleury: “I would’ve had a big problem with it if that had been presented to me.”

There are rumors that the Pittsburgh Penguins tried to reacquire Fleury but that the Golden Knights were not interested in moving the goaltender after his hot start this season. All of this, of course, despite other speculation the team was seeking a trade partner while trying to sign defenseman Alex Pietrangelo.

Friedman doesn’t go into much depth, but he writes that the Sabres are making Montour available in trade. The 26-year-old defenseman is eligible for unrestricted free agent status this summer and his name is being added to a long list of players that could shake loose before the NHL Trade Deadline.

There were other rumors that Eric Staal, Taylor Hall and Jack Eichel could all become available if the team continued to struggle in the standings this season.

He noted that Ryan is on a team-friendly deal and producing at a decent clip, Glendening is leading the NHL in faceoff percentage and Staal is the kind of veteran blueliner teams covet come playoff time.

Oilers Have Not Spoken with Adam Larsson About Extension

We wrote in the Oilers-specific rumors notes yesterday that GM Ken Holland and Larsson’s representatives have not spoken about a contract extension. Speculation is that there is no plan to do so prior to the season coming to a close. It sounds like the Oilers want to see what the young blueliners can do the rest of the way, what will happen with the expansion draft and how comes of the Ryan Nugent-Hopkins negotiations.

In other Oilers news, Antoine Roussel is being fined $5K for punching Jesse Puljujarvi last night during the game against the Vancouver Canucks. It wasn’t clear why Roussel snapped and started throwing punches but it seems that attack was unprovoked.