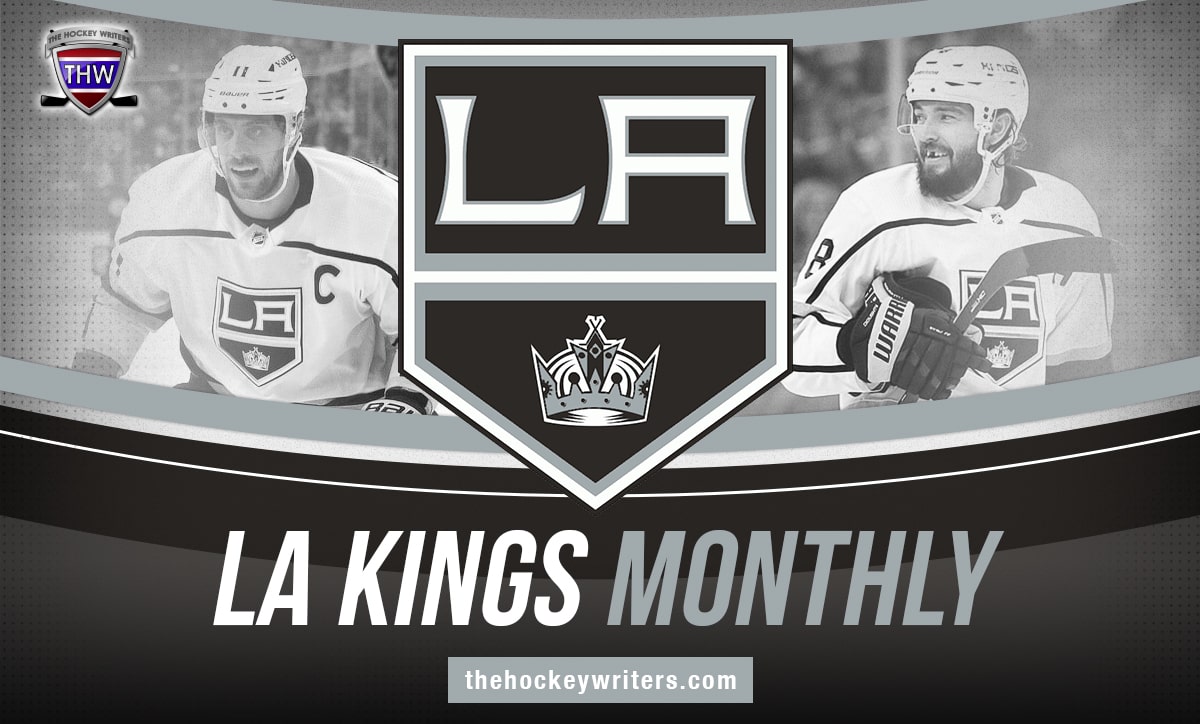 LA Kings Monthly is a series that analyzes the Los Angeles Kings and how they performed throughout the previous month. Each article discusses what went right for the team, what didn’t, as well as the best highlights, player, and game from the month.

Each edition also takes a peek at what the next month looks like for the Kings, with the top player and game to watch in the coming weeks. The team kicked off the season with two near-identical losses to the Minnesota Wild, both in overtime, but they then split two games with the Colorado Avalanche, two with the St. Louis Blues, and two with the Wild.

The Kings ended January with a record of 3-3-2, for eight points and a .500 points percentage. The West Division is extremely close, and LA is in the mix. Though the team’s record should be better, considering they held a two-goal lead heading into the third period in each of the first two games of the season before they lost in overtime, LA should be pleased with where they stand in the division. Not much was expected of them at the beginning of the season, yet they have put themselves in a decent spot after getting off to a slow start.

What Went Right in January: Doubted Players Had a Solid Start for the Kings

Heading into the season, there were questions about a few Kings players. This mainly included veterans who looked like they were on a downtrend, yet a number of them stepped up in the first month of the season.

Jeff Carter is a prime example. Due to injuries, Carter did not perform as well in the last couple of seasons as he once did. However, in January, he showed a big turnaround. He is tied for second on the team in points, with one goal and five assists. He also leads the team in shots with an impressive 25. Carter ended the month with 1.9 total individual expected goals (ixG), fourth on the team. Wins above replacement (WAR) – which shows a player’s contribution to his team in a single number – Carter is fourth on the team with a 0.3.

The Kings signed Andreas Athanasiou to a one-year, $1.2 million contract before the 2020-21 season. He put up 54 points in 2018-19 with the Detroit Red Wings, but he has not come close to those numbers since, which led some to doubt his abilities. Signing him has paid off so far, though. In seven games, he has three goals and two assists, tied for fifth on the team. He also posted an ixG of 1.64, sixth on the team, and a WAR of 0.4, tied for second on the team.

Drew Doughty received arguably the most criticism of any player this offseason. In 2019-20, he posted decent scoring numbers, but he was not very good defensively. It’s the same story this season, as shown by his regularized adjusted plus/minus (RAPM). He posted a Corsi for percentage (CF%) of 49.32% in January, and although that means that the Kings controlled the puck less than the opposition when he was on the ice, he still ranked 10th on the team.

Doughty also ended the month with a troubling minus-three. He ranks first in the league in goals scored among defensemen, though, with three. He also posted three assists for six points, tied for second on the team, but most of these points came on the power play; he only posted one assist at even strength.

In terms of the positives, Doughty showed impressive numbers in hits and blocks through the first few weeks of the season. His 13 hits are second on the team, and he blocked an impressive 15 shots to lead the team. Expected wins above replacement (xWAR) is a better metric to measure defensemen than WAR (since defensemen don’t typically have very good shooting percentages). Doughty finished the month first on the team in xWAR with 0.4. If he can step up his defensive game and even-strength offense, he could again be one of the better defensemen in the league.

What Went Wrong in January: The Kings Played Poorly 5v5

The answer to improving the Kings’ 5v5 offense is pretty simple. The young players need to step up, as Gabriel Vilardi led the youth in January with just three points. Before the season, it was clear that if LA was going to have success, they would need contributions from everyone. So far, the veteran core has produced most of the offense. If the youth of the team can turn things around, the Kings will be better offensively.

Improving the Kings’ defense without Matt Roy will be difficult. Since the beginning of 2019-20, Roy has been a key part of the blue line. Until he was injured against the Wild on Jan. 28, he was having another solid season. He leads the team in WAR with 0.6, and he is tied for second in xWAR with 0.3. His RAPM shows an overall solid offensive and defensive game at 5v5.

It is clear how valuable Roy is to the Kings’ D-core, and with how poor the team has been playing defensively, his loss is a tough pill to swallow. An improvement in Doughty’s defensive game could be the answer, but with how he has been playing recently in his own end, that might be too much to ask.

The Best of January

Nearing the end of the first period in a 1-1 game at the Enterprise Center, Trevor Moore hit Grundstrom with speed through the neutral zone. Grundstrom showed off his nice hands in a move around Vince Dunn before sniping top corner.

The most crucial part of this goal is the blocked shot by Grundstrom to get the puck out of the zone and start the play. It’s rare to see that level of defensive willingness and offensive skill showcased in the same play.

Save of the Month: Jonathan Quick – Jan 21 vs. Colorado Avalanche

Quick made a couple of outstanding saves in this game, helping the Kings to their first win of the season. If not for his incredible performance, the team may have extended their losing streak. The saves he made against one of the best teams in the league earned him the fourth-best save of week two. His saves can be found at 2:36 of the compilation.

First, Quick made a stunning glove save on Nazem Kadri’s deflection. Then, he robbed Gabriel Landeskog on a cross-ice play. He ended the night with an outstanding .923 save percentage (SV%).

Player of the Month: Anze Kopitar

Kopitar had a phenomenal month in terms of scoring. He only scored one goal, but totaled a whopping 11 assists in eight games. He leads the team in points (ranked fourth in the league), and leads the league in assists. Kopitar needs to score 50 points this season to reach 1,000 in his career, and he is well on his way. At the beginning of the season, he needed to mainting a 0.89 points per game pace to reach the milestone. With his solid start, though, he has given himself some breathing room, as he will only need to stay at a pace of 0.79 per game for the rest of the season.

Game of the Month: Jan 21 vs. Colorado Avalanche

The Kings entered their game versus the Avalanche after choking up two three-goal leads and losing a one-goal game to Colorado two days before. The Avs got off to a quick start and were up two goals after the first period. Mikko Rantanen tallied his third goal of the season and Nathan MacKinnon scored his second. The Kings came roaring back in the second and third, scoring four unanswered goals.

Doughty and Vilardi lit the lamp in the second period, and Adrian Kempe and Blake Lizotte added two more in the third. The Kings outshot the Avs 27-26, converted on 2/5 power-play chances, outhit Colorado 15-14, and they blocked 19 shots compared to the Avalanche’s 15. Kopitar’s two points and Quick’s excellent play, including the best saves of the month, pushed the Kings to their first win of the season, against arguably the best team in the league.

The Kings will have to build on their first month of play with a busy February ahead. The team begins their 13-game schedule with a home game versus the Anaheim Ducks before going on the road for a pair of games versus the Vegas Golden Knights. LA will then return to the Staples Center for four games, two versus the San Jose Sharks and two versus the Wild. The Kings will end February with a six-game road trip featuring three pairs of games, one in Arizona, one in St. Louis, and one in Minnesota.

Player to Watch in the Month Ahead: Adrian Kempe

Kempe has had a very good start to the season. He posted three goals and two assists, which is tied for fifth on the team in points. This is a career-high point pace for Kempe, at 35 points in a 56-game schedule. Additionally, he posted an ixG of 2.32 in January, third on the team, and finished the month with a CF% of 50.96%, sixth on the team, first for any player who played all eight games. He was also the only player that scored more than three points to post a CF% above 50%.

Kempe has been a steady point producer throughout his career, but he hasn’t quite broken through offensively. If he can continue to play as he did in January, he could prove to be a very valuable piece of the Kings’ offense. It will be interesting to see him either maintain this solid play or take a step back in the coming month.

Game to Watch in the Month Ahead: Feb 2 vs. Anaheim Ducks

The Ducks will visit Los Angeles for their first intrastate rivalry game this season. The 2020-21 season format allows for teams to face their divisional rivals upwards of eight times, likely rekindling some lost fire. This will likely stand true for the Kings, Ducks, and Sharks. Last season, none of the California teams made the playoffs, and with the current rebuilds, games between the three teams didn’t have as much intensity as one might expect. Games should be more heated given how close the standings are in the division, as every game this season can be considered a “four-point game.”