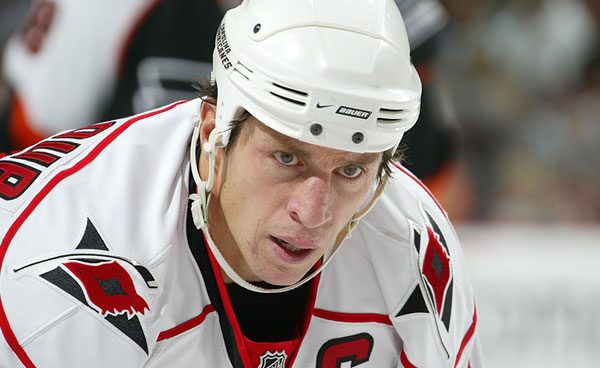 Streaks are the running theme through National Hockey League history on this date. In addition, quite a few members of the Hockey Hall of Fame had memorable moments and a pair of big names changed addresses. Come along on our daily trip back through decades on the THW time machine.

New York Rangers forward Murray Murdoch played in his 400th consecutive game, on Jan. 23, 1934, in a 5-2 victory over the Ottawa Senators. The team holds a pregame ceremony where another New York sports star know for long streaks, Lou Gehrig of the Yankees makes a presentation to Murdoch to honor his achievement. He played in 508 games in a row before retiring in 1937. He went on to spent 27 seasons as the head coach at Yale University.

Bobby Hull had a goal and an assist, on Jan. 23, 1972, to lead the Chicago Blackhawks to a 4-0 win over the Toronto Maple Leafs. This extended his team-record 21-game point streak, where he put up 23 goals and 35 points. He held onto this record until 2015 when Patrick Kane had at least one point in 26 straight games.

Ace Bailey had two goals and an assist, on Jan. 23, 1976, as the Washington Capitals ended their 25-game winless streak (0-22-3) with a 7-5 win over the Rangers. Surprisingly, this wasn’t even the longest such streak of the 1975-76 season as the Kansas City Scouts went 27 straight games without a victory.

The Buffalo Sabres became the first team in NHL history to win 10 straight road games, on Jan. 23, 1984, with a 5-3 victory at the Boston Bruins. This streak is still tied with five other teams for the second-longest in league history. The 2005-06 Detroit Red Wings and 2014-15 Minnesota both had 12-game road winning streaks.

Entering their game, on Jan. 23, 1985, the Los Angeles Kings had gone 21 straight home games versus the Philadelphia Flyers without a win. This streak was snapped with a 6-3 victory, led by Marcel Dionne’s goal and three assists. They had gone 0-17-4 at the Forum against the Flyers since their previous win on Oct. 20, 1973.

Exactly 20 years after his father extended his point streak with the Blackhawks, on Jan. 23, 1992, Brett Hull extended his with the St. Louis Blues to a record 25 straight games. He had a goal in a 6-5 loss to the visiting Kings. He scored 31 goals and 46 points during this remarkable run.

One year later, on Jan. 23, 1993, Mike Gartner became the first player in league history to score at least 30 goals in 14 straight seasons. Goal No. 30 of the season came in the Rangers’ 8-3 victory in Los Angeles.

William Karlsson got some revenge on his former team, on Jan. 23, 2018, as he scored two goals in the Vegas Golden Knights’ 6-3 victory over the Columbus Blue Jackets. The win extended their point streak at T-Mobile Arena to 12 games (10-0-2). This was their 32nd win of the season, one away from tying the NHL record for wins by a first-year team set by both the Mighty Ducks of Anaheim and Florida Panthers during the 1993-94 season. Of course, they went on to smash this record.

On Jan. 23, 1956, Montreal Canadiens star Jean Beliveau became the first hockey player to ever be featured on the cover of Sports Illustrated.

Wayne Gretzky scored a goal and added three assists, on Jan. 23, 1983, to lead the Edmonton Oilers to an 8-6 win over the Kings. The trio of helpers gave him 400 career assists in just 290 NHL games.

Paul Coffey scored his 17th goal of the season, on Jan. 23, 1970, in the Pittsburgh Penguins’ 4-2 loss to the New Jersey Devils. This was the 271st goal of this career, putting one ahead of Bobby or for the second-most in league history by a defenseman. At the time, he only trailed Denis Potvin, who scored 310 goals.

Pat LaFontaine picked up his 300th career assist, on Jan. 23, 1992, as he scored a goal and set up two others in the Sabres’ 5-4 overtime win versus the Penguins.

Two years later, on Jan. 23, 1997, Ray Bourque scored his 350th career goal as the Bruins lost 4-1 to the visiting Panthers. He joined Coffey as the only two defensemen to score 350 goals. He still sits atop the all-time goals list for blueliners with 410. Coffey is second with 396.

On that same night, Pavel Bure became the fourth player in Vancouver Canucks’ franchise history to score 200 goals in a 4-3 loss at the Blues.

A pair of Hall of Famers had memorable nights on Jan. 23, 2004. First, Ron Francis became just the third player in the history of the league to play in 1,700 regular-season games. He picked up an assist in the Carolina Hurricane’s 3-2 loss to the New York Islanders.

In New Jersey, Martin Brodeur matched his career-high with his 10th shutout of the season, as the Devils beat the visiting Canadiens 2-0. He finished the season with 11 shutouts, a mark he beat in 2006-07 when he had 12.

Rod Brind’Amour began his long relationship with the Hurricanes, on Jan. 23, 2000. He was traded by the Flyers, along with goaltender Jean-Marc Pelletier, to Carolina for Keith Primeau. He spent the final 10 seasons of his career with the Hurricanes, scoring 174 goals and 473 points in 694 games. He was a big part of their Stanley Cup victory in 2006 and won back-to-back Selke Trophies, for being the league’s best defensive forward, in 2006 and 2007. Brind’Amour is in his third season as the Hurricanes head coach.

On Jan 23, 2004, the Rangers acquired Jaromir Jagr from Capitals, straight up for forward Anson Carter. The Caps originally sent Kris Beech, Michal Sivek and Ross Lupaschuk to Pittsburgh for the future Hall of Famer on July 11, 2001. While he wasn’t at his Art Trophy-winning levels he played at with the Penguins, Jagr scored 83 goals and 201 points in 190 games with Washington.

The Red Wings set an NHL record by scoring 15 straight goals, on Jan. 23, 1944, in their 15-0 blowout of the Rangers. Syd Howe led the offense with three goals and two assists while goaltender Connie Dion picked up his first career shutout.

Exactly two years later, Theo Fleury also appeared in his 1,000th career game. He celebrated his milestone with a goal and three assists in the Rangers’ 8-4 win over the Bruins. His three assists gave him 600 in his career.

Alex Ovechkin scored a goal, on Jan. 23, 2019, to give him 1,179 career points, tying him Sergei Fedorov for the most by a Russian-born player. However, the Capitals lost 6-3 at the Maple Leafs thanks in part to Nazem Kadri’s fifth career hat trick. This was Toronto’s 30th win in just 49 games; their best start since they won 30 games in 48 games during the 1934-35 season.

Hall of Famer Brendan Shanahan, born on this date, in Mimico Ontario, in 1969, headlines a group of 23 players who appropriately share a Jan. 23 birthday. Other notable names from this bunch include Richard Smehlik (51), Tomas Holmstrom (48), Scott Hannan (42), Leo Komarov (34) and Boo Nieves (27).