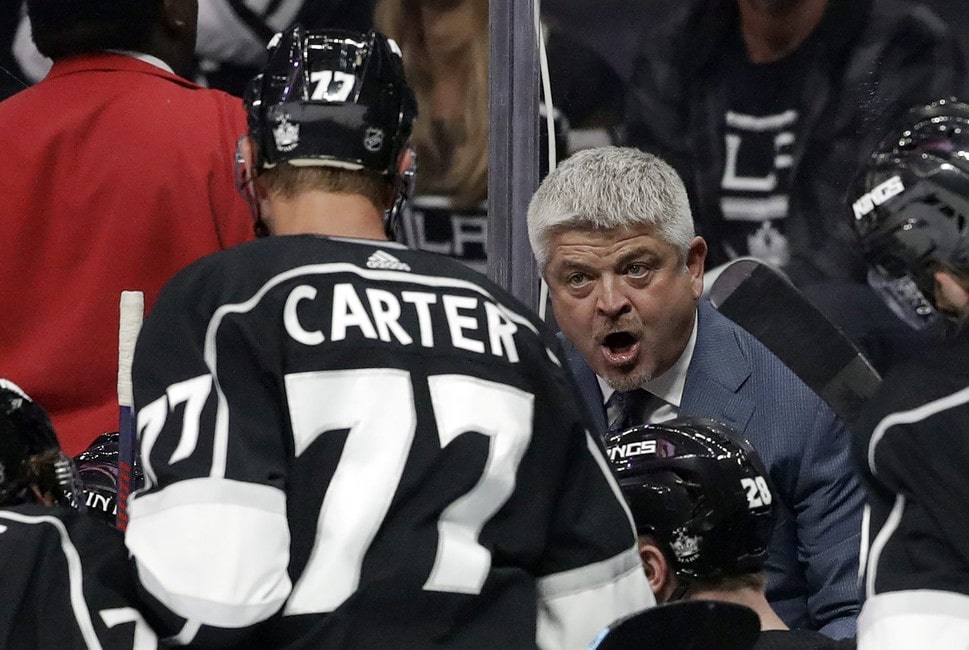 The Los Angeles Kings took the ice Thursday night for their first game of the 2020-21 season versus the Minnesota Wild. Prior to the start of the game, the team hadn’t played a game since March 2020, as they missed the NHL’s 24-team playoff format that took place last summer.

There is a lot of hype surrounding LA this season, considering how many exciting prospects they have. For the team’s first game, though, they opted to go with a more experienced lineup. Both Gabriel Vilardi and Kale Clague were in the lineup, but outside of those two, the lineup looked relatively similar to last season.

The game stayed scoreless through most of the first period until Jonas Brodin found the back of the net with just under four minutes to play in the period. The Wild iced the puck with five seconds remaining in the first, and the Kings scored on a fabulous play off the faceoff. The Kings would add two more goals in the second period, including Andreas Athanasiou’s first goal with the team.

The Wild came roaring back in the third period with two goals of their own, sending the game to overtime. At 3:47 of the extra frame, Kirill Kaprizov scored on a breakaway to end the game, tallying his third point of the night in his NHL debut.

Veterans Stepped Up for the Kings

One of the keys for the Kings going into this season was their veteran presence. While the team does have one of the best prospect systems in the league, if not the best, they aren’t quite ready to take over the team. If LA is going to have any success this season, they will need their veterans to have the impact they did on Thursday night.

Anze Kopitar had a solid game, as usual — he posted two assists, had four shots on goal, and won 67 percent of his faceoffs. He also played the second-most minutes of any Kings’ skater, totaling 23:29 on the night. Alex Iafallo also put up one assist, two shots on goal, and two hits.

But the real stars of the game were Dustin Brown and Jeff Carter. Brown passed a big milestone, recording his 300th career goal, and Carter was the team’s best player. Carter scored the first goal for the Kings and also executed a textbook two-on-one, picking up an assist. He was the only forward for the team that ended the night with a positive plus/minus, a plus-one, and he registered a staggering seven shots on goal.

There is a lot of uncertainty surrounding Carter this season due to injury issues and a lack of scoring in recent seasons. While one game means nothing, if he can continue to play as he did on Thursday, he will silence the doubters.

Drew Doughty is another player that got some criticism this offseason. He had decent point totals last season. But as far as advanced stats and possession metrics, he did not impress.

Doughty had a very interesting first game. He was a team-worst minus-three on the night, but he played a physical game with three hits, and he blocked an incredible five shots. This included a crucial block in overtime on the penalty kill. He also led the team in minutes played, with 29:12 in total. Based on his stats, one might have expected Doughty to have come out of the game with a better plus/minus. But he will look to the Kings’ next game to show that his defensive play can pay off.

Kings Need to Stay Out of the Penalty Box

The Kings took six penalties in their loss to the Wild, which is simply too many to take on a regular basis and expect to win. There is a silver lining, though. The team killed off all of the penalties, showing solid special teams play. While there was no harm done in terms of power play goals for Minnesota, indirectly, the penalties did play a role in the loss.

Aside from the fact that the chance of the Kings scoring is significantly less if they are down a man, the last penalty the team took, in particular, killed their momentum. In the last eight minutes of regulation, the Kings outshot the Wild 7-1. With one minute remaining in the period, newcomer Olli Maatta took the team’s final penalty of the game. Even though the Wild didn’t score on the power play, it took away all of the Kings’ momentum going into the end of regulation and overtime.

Kings Allowed the Game to Get Away From Them

Though the two-goal lead is considered the worst lead in hockey, the Kings likely should have taken this one. Overall, the team outshot the Wild 34-27, they had 25 scoring chances, to the Wild’s 20, and as previously mentioned, they controlled the second half of the third period.

This one is going to sting a little bit. I think we gave it away in the third… We should be able to lock that down going into the third, and that can’t happen too many more times going forward.

Anze Kopitar on opening night loss to the Wild.

With that said, the reasons why the Kings gave up two goals in the third period were clear. The team spent too much time in their own zone, and over the entire game, the team posted an offensive zone start percentage (oZS%) of 48.7%, while the Wild posted a much better oZS% of 54.3%.

In addition to the realigned divisions and shortened season, another change to the format of this season is that most games will be played in pairs. Though the Kings’ opening night may have been a bit of a disappointment, they will get a chance to put it behind them less than 48 hours after the loss. LA should focus on limiting the number of penalties they take while playing with the same aggression they did in game one. If they can capture a lead going into the end of the game, the Kings will likely be able to come out with the win, as they already know what losing it feels like.