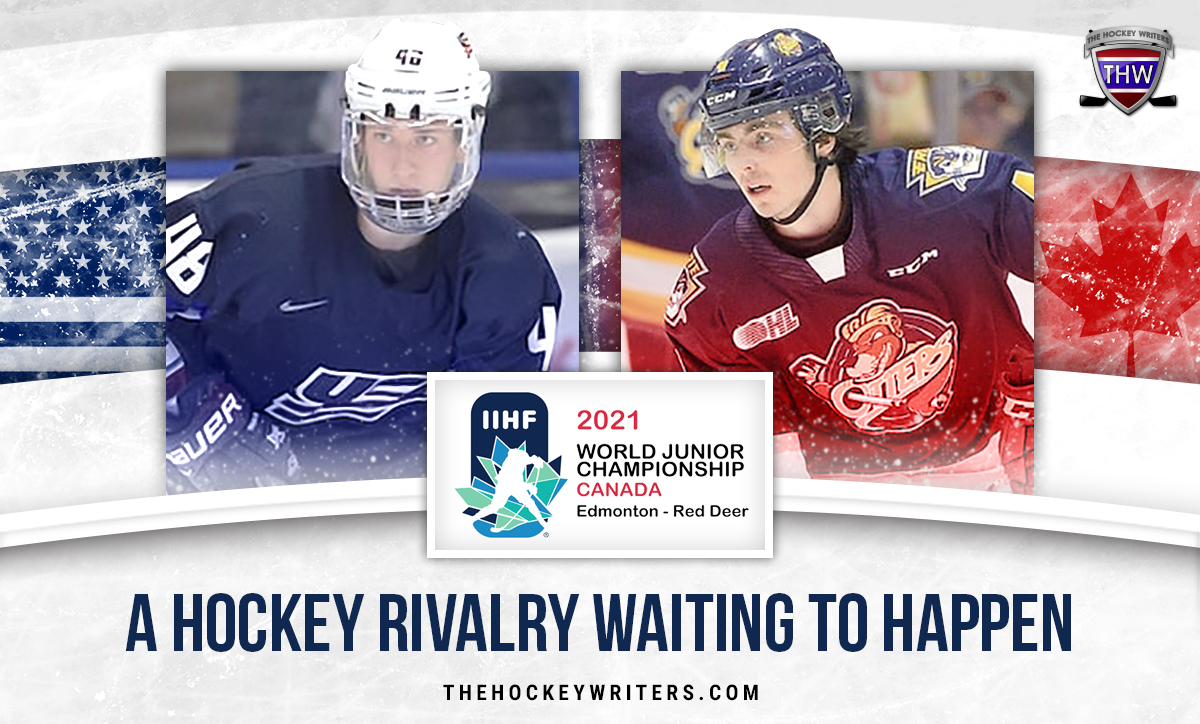 Defenseman Jake Sanderson and Team USA won gold over defenseman Jamie Drysdale and Team Canada at the 2021 World Junior Championship (WJC). Some would tell you that this is Sanderson’s second major upset over Drysdale in the past three months.

Prior to the tournament, eight of 10 experts at the Sporting News picked Canada to win gold, while just two predicted Team USA on top of the podium. The morning of the game, MSN Sports picked Team Canada. That article cited the wagering site DraftKings.com as having the Canadians the betting favorite at -200, with the Americans at +135.

More than a year prior to the 2020 NHL Entry Draft, most prognosticators ranked Drysdale as the top defenseman available. Sanderson was, at best, an afterthought that far out. But, as you can read here, Sanderson slowly rose up the pre-draft lists and mock drafts.

Then came October and Sanderson’s first “upset” of Drysdale. When the Ottawa Senators drafted Sanderson at #5, with Drysdale still on the board, it went against the final mock drafts and prospect lists. Anaheim picked Drysdale immediately afterward at #6. And the two names may now be forever linked in future NHL lore.

Team USA and the Team Canada didn’t meet in the group stage of the WJC. Starting the tournament in different groups, the earliest they could play each other would be the quarterfinal round. Canada swept through their group without seeming to break a sweat. The Americans, on the other hand, lost their first game (against the Russians) and needed an unexpected shutout win over Swedish to finish atop their group.

Team Canada treated the preliminary round in Group A as a walk in the park.

Team Canada finished the preliminary round with a cumulative score of 33-4.

Team USA overcame a rough start to the preliminary round to finish atop Group B.

Team USA finished group play with a record of three wins and one loss for nine points. Russia earned two regulation wins, one overtime win, with one loss for eight points. Sweden finished third in Group B with two wins, a regulation loss and an overtime loss.

Team Canada faced the Czech Republic in the quarterfinals. The Czechs ended group play with wins over Austria and a tough Russian squad, and losses to Sweden and Team USA. The Canadians shutout the Czechs 3-0, outshooting them 29-25. Drysdale was not on the ice for any of the goals, but again finished second on Team Canada in TOI.

In their quarterfinal game, Team USA never trailed in a 5-2 win over Slovakia. Sanderson played just under 20 minutes (third on the team), not registering a point and finishing even in plus/minus.

The Canadians shut out the Russians 5-0 in the semifinal. Drysdale played 25 minutes, second on the team, and didn’t register on the scoresheet (with a plus/minus of zero).

Team USA had a much tougher time in the semifinals against Finland (4-3). With less than four minutes to play, the Finns tied the game, 3-3. Arthur Kaliyev (drafted by the Los Angeles Kings in 2019) scored the American’s clinching fourth goal, with 1:16 remaining in the third period, assisted by Alex Turcotte and Sanderson.

Sanderson’s assist on the game-winning goal was his only point of the night. He registered +1, and was ninth on the team in TOI at 16:41 as coach Nate Leaman relied heavily on his top players.

The semifinal wins set the stage for a highly anticipated Canadian-American gold medal game. Both Drysdale for Team Canada and Sanderson for Team USA were on the ice for the opening faceoff.

Related: Canadiens Can Be Happy About the 2021 World Juniors

Just over five minutes into the game, the subject of Sanderson and Drysdale popped into the broadcast on the NHL Network, with color analyst Dave Starman saying this about Sanderson:

The Americans scored the first goal at 13:25 of the first period, with Drysdale and Sanderson on the ice. Both players started the second period. About a half-minute into the period, Sanderson was instrumental in Team USA’s second goal. Pinching in, he threw a big hit on Team Canada’s Dylan Cozens that prevented the puck from leaving the zone. Just seconds before the puck crossed the Canadian goal line, Drysdale slipped a bit just in front of his goalie while trying to break up the play.

What a great hit to get this play set up!

Sanderson and his Team USA took home the gold with their 2-0 win, the Canadians settling, none-too-happily, for silver. (Finland beat Russia 3-1 for third place and the bronze.) Sanderson played 21:41 in the final, tops for Team USA, and finished the game +2. Drysdale skated 25:24, second on Team Canada, and finished the game -2.

What’s Next for Sanderson and Drysdale?

Drysdale is expected to return to his Junior OHL club, the Erie Otters. Sanderson will leave the NTDP for a freshman year at the University of North Dakota. Since the OHL and NCAA clubs will not face each other next season, the two defensemen won’t meet on the ice.

In the extremely unlikely event that both defensemen make the rosters of their NHL clubs, the 2020-21 playoff format would see them go head-to-head only if Ottawa (Sanderson) and Anaheim (Drysdale) won their divisions. And that’s about as likely as — oh, I don’t know — Detroit winning the Central and New Jersey winning the East? Nah, let’s be realistic — Ottawa and Anaheim winning their divisions in 2020-21 is about as realistic as Santa bringing me what’s on my list next Christmas, just in time for the 2022 WJC. (And if you could only see my list!)

Drysdale and Sanderson will likely meet next at the 2022 WJC, to be held in Edmonton and Red Deer, Alberta, for the second consecutive year. (The 2022 WJC had been scheduled for Gothenburg, Sweden, but because the COVID-19 pandemic prevented fans from attending games this year, the games will again be held in Canada. Sweden gets bumped to 2024, with Russia in between.)

But wait! Sanderson and Drysdale will play in the 2022 WJC if their NHL clubs permit it. After the Chicago Blackhawks lost Kirby Dach (possibly for the entire 2020-21 NHL season) due to an injury suffered at the 2021 WJC, teams might be more reluctant to release budding young stars for the annual tournament.

One Player to Watch for Each World Junior Team

7 Predictions for the 2021 World Junior Championship