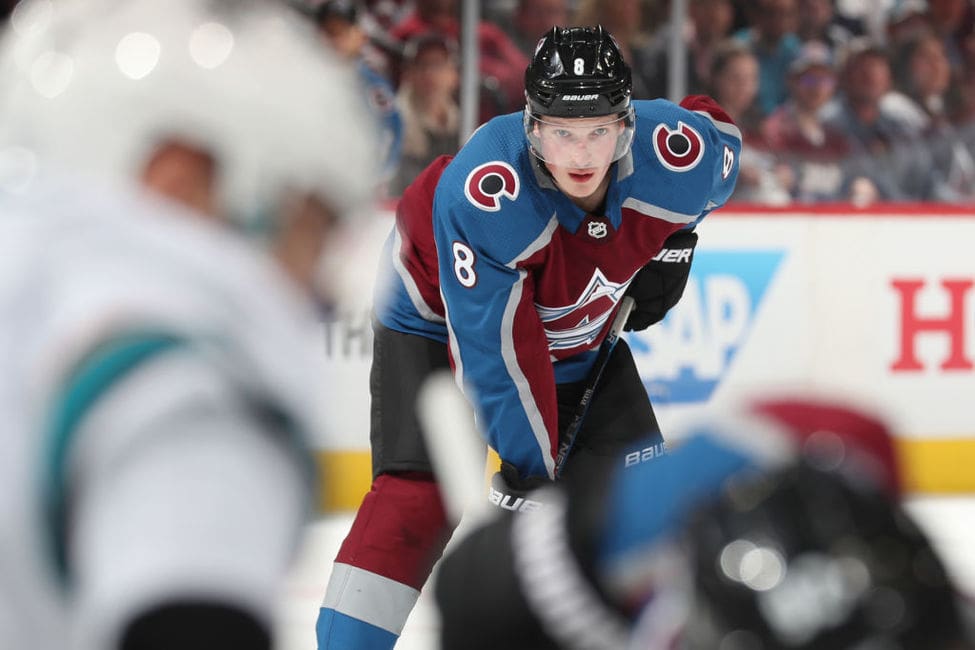 It’s hard to believe that just one year after winning the Calder Trophy, given each year to the NHL’s most outstanding rookie, Colorado Avalanche defenseman Cale Makar is going to be in need of a new contract.

After being selected fourth overall in the 2017 NHL Entry Draft, Makar decided to honor his commitment to the University of Massachusetts and play college hockey rather than make the jump to the NHL as an 18-year-old. Following two seasons as a top-pairing defenseman for the Minutemen, he signed his three-year, entry-level contract on April 14, 2019.

Jumping to the NHL

By choosing to sign Makar during the 2019 Stanley Cup playoffs, Avalanche general manager Joe Sakic signaled he had no issues burning the first year of his top prospect’s rookie contract – something that happened when the defenseman made his NHL debut a day after putting pen to paper in Game 3 of the first-round series against the Calgary Flames.

The Calgary native made an immediate impact against his hometown team, scoring his first NHL goal in his debut en route to a 6-2 blowout of the Flames while also becoming the first defenseman to score a playoff goal in his NHL debut in league history. Makar appeared in 10 games for the Avalanche during the 2019 playoffs, adding five assists to go with his lone goal.

Since the Avalanche burned the first year of Makar’s three-year rookie deal when they inserted him into the lineup for the playoffs, his rookie season would take place during the 2019-20 NHL season – the second year of his contract. His impact was immediately felt as he made the team as a 20-year-old out of camp and instantly became the Avs’ top-pair, right-handed defenseman.

As a first-year player, he finished fourth on the team in time-on-ice, averaging just over 21 minutes per game, and posted 50 points in 57 games in the pandemic-shortened season, good for first among Avalanche defensemen and second on the team behind only Nathan MacKinnon. His 0.87 points-per-game puts him first among his fellow first-year players despite finishing second in scoring to Vancouver Canucks’ defenseman Quinn Hughes’ 53 points in 68 games.

Despite his team’s disappointing second-round exit from the Edmonton bubble during the 2020 Stanley Cup playoffs, Makar picked up where he left off in the regular season – scoring at a point-per-game pace with 15 points in 15 playoff games. His stellar season was topped off by being named the winner of the Calder Trophy ahead of Hughes and Chicago Blackhawks’ forward Dominik Kubalik.

With just one full season under his belt, it’s tough to say what type of deal Makar is deserving of before he hits restricted free agency in the summer of 2021. Due to financial strains from the COVID-19 pandemic, both players and teams are currently more inclined to sign cheaper, short-term contracts – keeping payroll low for teams without revenue, and for players, holding out for a higher salary when the league is stronger financially.

However, let’s take a look at which contracts Sakic could use as a comparable when it’s time to sign his star defenseman.

General manager Pierre Dorion and the Ottawa Senators didn’t waste any time extending the leader of the club’s defense, signing the left-handed Chabot to an eight-year extension in September 2019, one year before he was due to hit restricted free agency and with one year left on his three-year, entry-level contract.

Chabot was coming off an impressive second season that established him as a cornerstone for a rebuilding Senators team, scoring 14 goals and totaling 55 points in 70 games for a club that was nowhere near making the playoffs. In 2019-20, the scoring dropped off a bit to 39 points in 71 games.

Coming off his three-year entry-level contract, the American-born Werenski and the Columbus Blue Jackets elected to sign a short-term bridge deal, keeping the left-shot defenseman in Columbus for another three years through 2022 while maintaining his restricted free agent status. Werenski has scored more than 40 points in three of his four NHL seasons, with his one “down year” being a 37-point season back in 2017-18.

The Panthers signed their franchise defenseman the first moment they were able to, extending Ekblad on July 1, 2016 – exactly one year before his rookie contract was set to expire. The right-shot defenseman has been the Panthers’ leader on the blue line since he was drafted with the first overall pick back in 2014 so signing him to the most amount of years allowed was a no-brainer for Florida’s management team. Ekblad doesn’t have the same offensive talent as Makar, averaging less than half a point-per-game over his 458 game NHL career, but has done a good enough job to establish himself as a No. 1 defenseman.

After looking at a few comparables, Chabot’s deal in Ottawa seems like the closest contract to what Makar could fetch from the Avalanche if the two sides looked to sign a long-term deal. Although the team only has one shortened season to evaluate Makar’s value, general manager Joe Sakic would be wise to get a contract done sooner rather than later as his star defenseman’s value is likely to only go up.

Chabot’s $8 million cap hit ranks seventh among defensemen entering the 2020-21 season – if Makar’s next contract comes in anywhere close to that number, it will likely prove to be one of the biggest bargains around the league in short time.